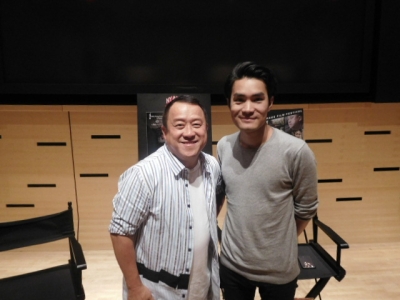 The below interview is also accompanied by a bonus episode available here. I recently did a little collaboration with the Unseen Films blog (unseenfilms.blogspot.com) as site writer Steve Kopian was going to get a chance to interview actor and filmmaker Eric Tsang at the 2017 New York Asian Film Festival. Eric was there to receive a Lifetime Achievement Award from the festival and Steve interviewed not only Eric but also the director of Mad World Wong Chun (starring Shawn Yue and Eric Tsang). Lovehkfilm said of Mad World:

“Remarkably sensitive and restrained look at a bi-polar-suffering Hong Konger from first time feature director Wong Chun. Shawn Yue is very effective in the lead role, though Eric Tsang outshines him as his caring father. One of Hong Kong Cinema’s more surprising and worthy films in 2016. A remarkably sensitive look at mental illness in Hong Kong.”

So along with translator Frank Djeng and Jared King, Steve sat down with the director and actor to talk Mad World, dramatic acting and how this fits into Eric’s career as a whole. I was asked to contribute a few questions and Unseen Films were kind enough to let us use the audio as a compliment to this transcribed interview both available on Podcast On Fire and Unseen Films. Thank you again to Steve and Jared for letting me submit some personal questions as a fan and as a fan of people evolving their craft as either veterans or newcomers. Also a big thanks to Emma Griffith and Subway Cinema for setting up the sessions, John DiBello for the final edit of the interview and also director Wong Chun and Eric Tsang for taking the time.

Steve: Where did MAD WORLD come from?

Wong Chun: So the idea for MAD WORLD came from Florence (Chan), the screenwriter. She saw a TV news story about a middle-aged man killing his father who had been locating his  long-term caring him. But the, the news never explicitly explained why he killed him. So Florence was intrigued by that idea and wanted to know, you know, what would lead, you know, a sibling  or to kill his or her own parents. So that’s how the, the fruit of the project started.

Steve: Was the actual story about have a son being released from a hospital?

Wong Chun: Uh, no, not really.

Steve:  So that was just created for the film?

Wong Chun: Yes. Florence was kind of interested in writing a story about depression, at first. But she did all of the research and found out that bipolar disorder is on the rise in Hong Kong. And at the same time, we knew nothing about it, and we have some really serious misconceptions about it. And she started to think that maybe that’s something a little bit more urgent for us to talk about, so she started a project and combined the two things together into one story. 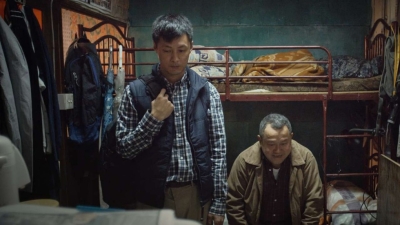 Steve: I’m curious if there are situations where children are being released into the care of parents they don’t really know. Is this something that happens frequently in Hong Kong?

Wong Chun: Uh, I wouldn’t say that. The film is kind of a specific case but actually, I would say there some cases that, ’cause the father is, uh, truck driver driving between mainland and Hong Kong. And usually these kind of drivers spend very little time with his family, so they usually have some issues between the guy and their families. And when the driver’s issue combines with the mental illness issue, that’s where the, the story came.

Steve: How did you come to cast Eric?

Wong Chun: Actually, the script was tailor-made for him. I mean, the character was tailor-made for him. And of course we have watched all his films. We have seen all his acting in comedies or in gangster movies. He had some really good caring among the people films in the ’80s or early 90’s like COMRADES or — and we want to bring back that type of Eric Tsang acting  to 2017.

Steve: Were you happy to get a meaty role like this? You’re primarily known, especially here in America as a comedic actor. Jared and myself watch tons of Hong Kong films so we’ve seen everything you can do, bt for many people you’re not thought of as this deep heavy actor.

Tsang:  As an actor, of course I want to try something new, or something rare. I’ve been a comedian for over 20 years and I’ve always liked to do a serious role, but not something that’s too sappy, you know, too tragic. I usually try to avoid starring in a film that requires a sad character. But I was very impressed by Florence’s script and the director’s intention in the project, the passion and the dedication, and so on. You know, that’s why I decided to take on this character. 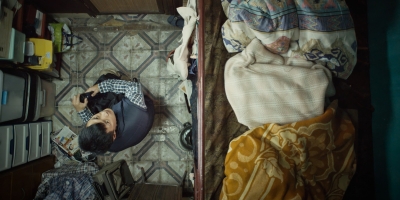 Tsang: So, I was a newcomer, too. At the time when I was a newcomer, I wanted to have a mentor or someone who could guide me in my career path or my acting career. So now that I’ve become sort of, like, a mentor myself,  I wanna help newcomers.  I feel it’s my chance to help new talent, new directors achieve their goal. And also, I want to find someone who can sort of inherit a seat in terms of the Hong Kong film industry , we are aging, so we desperately looking for new talent and new people. And when I was look for new talent I don’t look for just technical excellence, their own personality, their own character are all very important to me, and I feel that, I find that in Wong.

Steve: When you put the film together you weren’t overly melodramatic. Hong Kong films tend to ring everything out of every bit of emotion. And of the things I absolutely love about this film is that it doesn’t go overboard. It’s really realistic. I have friends who have parents and kids who have mental illness and based on what I’ve seen with them you’ve got it right you didn’t give too much. Was it difficult to, to make that choice not to make it more melodramatic, but make it more serious, make it more  real.

Wong: It wasn’t that difficult, but you’ve asked a very good question that made me struggle for a few years from the writing to the shooting and editing in that how should I portray the story and the characters. But the most important point was that we wrote the story we heard a lot of real stories from real people. And so, for me this was not only a drama that we created but it’s also reflecting some real experience from real people.

So, I have a very strong, um, feeling of respecting the, the people who, who gave us their story. And, and this, this kinda feeling gives, give me a restraint to execute everything.  I didn’t have an intention to make it too melodramatic anything. So, it wasn’t that difficult, but that was the top I mean the number one question in my mind when I was doing every scene, when I was doing every part of the film. Yeah. 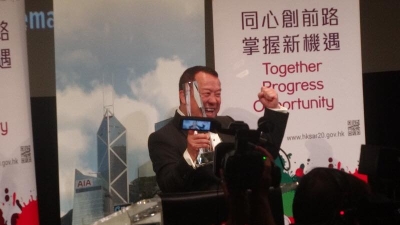 Tsang : I feel this is the best part that I’ve held in making movies you know. You experience different lives. You know can act in different roles.. You can become different people, uh, you know not just in drama, not just action, but also comedy. And, and to me that is you know that’s as far the happiest part. You know the the one thing that makes me very happy about it, is to experience different lives. So, I was like maybe I’ll be doing a few comedies now and then, “Oh OK now I switch to dramas.” And then after a few dramas, “OK, now I switch to action.” So  as far and it doesn’t really matter what kind of genre I’m acting in as long it is a good character, I would be more than willing  to be  involved in the film. You can work as different guys. You know you could be a bad guys. Well you could be anything.

Steve: Are you gonna direct more? I just know you produce, you direct, you write.

Tsang: Never know, because, uh, once we’ve got a good screenplay, once something happens, then you do it. So, don’t plan it.  The change will come. Because for now I won’t repeat my work.

Steve: Does your son (director Derek Tsang) come to you for advice?

Tsang: No, no, no, nothing. Because I hope he can grow up by himself. You know, this is much better for him. I enjoy that, that he could do it himself. Then I found it, it will grow up.

Steve: I have to ask you this. You’ve done over 300 films, um, in various forms and whatever. You’re getting a lifetime achievement award, which is long overdue. What would be the one role or what would be the one thing you’d want to be known, remembered for?

Tsang: So, yeah, I mean, I, I, I really don’t know. I’ve done so many things, I’ve done so many roles, you know. Um, I do serious roles to show audiences I’m not just a comedian. I do, uh, acti-, I do gangster roles to show I’m not just a dramatic actor or I do other roles to show I’m not just a gangster. So, I try to give audiences new impressions of myself. A new perspective on myself as an actor, so, the one thing that I hope they remembered most is the roles that I’ve played. Uh, to me this is the best part of my artistic career that I hope that people will remember me, for the roles that I’ve done. I mean, you know, different people like different roles that I play. Some people like me being a gangster, some people like me being a comedian so, like, that’s what I hope, my hope is that people remember me for all the different roles that I’ve played, not just one, single role.