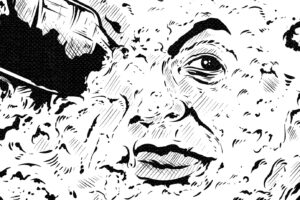 The story of a group of astronomers launched to the moon in a home-made ship, once they land, they meet the moons inhabitants – mad theatrical antics ensue!

If you were looking for proof that director Georges Méliès was a pioneer in special effects and filmmaking – A Trip to the Moon is a great example. This short film will be known by many for the iconic image of the face in the moon with a rocket in its eye.

When Arrow Academy announced the Blu-ray release of this film, I jumped at the chance to review this film. My interest in Méliès was captured when I first saw Martin Scorseses HUGO (2011), Méliès was portrayed by Ben Kingslay and bang in the middle of that movie we’re given a 10-minute history lesson on the life and career of Georges Méliès – it fascinated me.

I was given the Blu-ray disc only from the distributor to review on this occasion – it didn’t include the Long-Lost Autobiography: Father of Sci-Fi and Fantasy Cinema. But! The Blu-ray is good enough for me to talk about – at length!

Speaking of length, I was genuinely surprised that the films running was no longer than twenty minutes. This disc contains both the Black & White original (12 minutes) and the Colourised print of the movie (16 minutes). So, for a short film, that’s why you got a short synopsis at the start of this review. Now, I’m sure you would feel pretty miffed off if you’ve just shelled out £49.99 for the set, only to be given a cloth bound book and a 15-minute movie, thankfully it’s all about the special features.

Firstly, we have Le Grand Méliès (1952) – a short film directed by Georges Franju about the life and work of Méliès, Georges is portrayed by his son; André Méliès. It runs for 30 minutes following Georges life story. What I liked about this feature was that you are given the option to view the film with either the original audio narration in French with subtitles or listen to it dubbed into English. It was nice of them to give us the option. A great bonus feature, which is definitely worth watching.

The Innovations of Georges Méliès – new video essay by Jon Spira exploring A Trip to the Moon and Méliès’ career is a 12-minute feature with Spira talking over footage of Méliès work, we get to see footage from some of his other movies – some of which I am now more interesting in devouring.

An Extraordinary Voyage – is a 66-minute documentary on the life of Georges, his filmography and then we get an extensive look into the story of finding the colour print and a great detailed look into the restoration process. It also features some stock footage of Tom Hanks acting as Méliès for TV, its great footage, something I never knew existed – it’s a great special feature that beefs up this release.

The only thing I think we were missing from the special features is an audio commentary, I would have loved to heard someone talk over the movie giving us their take on the story, dropping us some facts or trivia about this wonderful piece of cinema history. But hey, beggars can’t be choosers!

Overall Arrow Academy have spoiled us with this cinematic gem, they’ve polished the best they can with a handful of well-thought-out special features. I couldn’t recommend it for it’s retail price, but if this was ever on sale or second-hand and you have the mildest interest in cinema history or silent movies – I would certainly recommend this blu-ray. Bon Voyage!

A Trip to the Moon