Set in a neon-lit futuristic Australia where the economy has collapsed and the cities have turned into wastelands with their dwellers becoming scavengers. Amongst they bleak neon-lit future we have Jimmy (Ned Manning), a young man who is keen to grow big and help his older, bigger brother Frank scavenge scrap metal from car wrecks. On his night off, Jimmy convinces Frank to loan him his chevy to take his girl, Carmen (Natalie McCurry) to the drive-in for a movie and hopefully a cheeky make-out session.

Whilst Jimmy’s getting lucky with Carmen in the back of the chevy, the pair are sudden thrown – two wheels have been nicked from Franks Chevy. When approaching the Drive-in Manager to complain he explains to Jimmy; That’s it, you belong here now – there’s no way out. You’re trapped here, just like everyone else.

Brian Trenchard-Smith delivers us a giant slice of Ozploitation, a genre I wasn’t familiar with – but it makes sense that Mad Max may have kick started a new genre of actions films. My initial thoughts was, Christ the acting is a bit ropey in this – for example the gang of blokes hanging around the cinema bathrooms – trying to recruit Jimmy, it is a little cringe-worthy. But as the film rolls on, it turned out to be a lot of fun – the production value and sets were excellent, the opening sequences reminded me of films like Robocop and Escape from New York.

I just ate the story up! I loved the concept getting trapped in the Drive-in at night and by morning they’ve woken up in a wasteland, a concentration camp littered with scrapped cars. Jimmy is quite a relateable, sensible character – he wants out of this prison! Whilst everyone else just accepts it, they just drink it in – accept their place, take the free drugs, drink the free beer and give up any resistance. I was properly rooting for Jimmy and his great escape.

Dead End Drive-In is receiving the Arrow treatment celebrating its 30 year anniversary since its original release. Special Features on the release are funny, we’re given two documentaries – neither are on Dead End Drive-In, but they are early features from director Brian Trenchard-Smith – including a great series of candid interviews with Australian Stuntmen. We’re also given a photo diary from one of the graffiti artists who had their arsed saved by Dead End Drive-In. Other than the Theatrical Trailer we’re given a full audio commentary from Brian and here’s great to listen to plenty of stories and passion about Dead End Drive-In.

Overall a rough little gem that snuck out from the land down-under and it shouldn’t be ignored! 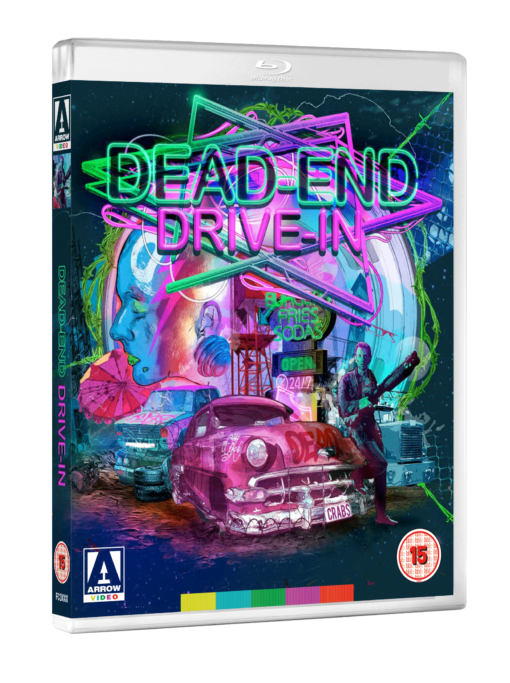