Set in the shadows of the Las Vegas Strip, The Trust follows the story of two LVPD cops Stone (Nicolas Cage) and Waters (Elijah Wood). They aren’t the most conventional cops, Waters is slacker and Stone frustrated by being overlooked by his peers. Stone makes an interesting discovery when he’s sent a menial task, this discovery could lead him and Waters to a lot of money. But, are they smart enough to pull of this off without getting caught or worse, killed?

Nic Cage and Elijah Wood, team up to provide the star power to give directors the Brewer brothers enough recognition in their debut feature film. How was it? Decent.

It’s not the strongest story, the premise is great, but the eventual payoff comes across a little wobbly. The discovery and the planning of their ‘heist’ is fun, seeing Cage infiltrate and become a kitchen porter delivered in a nice little montage sequence.

I can imagine Cage reading the script to this and relishing the thought of character being slightly unhinged, a bit zany – the real overly positive figure. It’s only right to have Wood play the uncertain and questionable opposite to Cage. The acting is what you can imagine with these juggernaut leads, Cage being crazed is a doddle and Wood playing a man on the verge of a breakdown is brought with ease.

Other notable faces that pop up in this feature include Ethan Suplee (American History X) as a crooked detective with a unhealthy obsession with Russian roulette. Cinema veteran Jerry Lewis (The Nutty Professor) stars as the father of Nic Cages character Stone – a former and more credible detective. In the latter half of the film this sausage party is broken up with the introduction of mystery woman played by Sky Ferreira (The Green Inferno).

The end of the film was a little more surprising that I originally expected, without spoiling it, I would have little the ending to have been fleshed out a little bit more – just to see what we were dealing with.

We were lucky enough to have been provided a copy of the DVD release of The Trust – the sole special feature on this disc is a 12 minute Behind the Scenes feature. We get some interviews with the primary cast and the crew talking highly of the story and their experiences working on set and their experiences with Nic Cage and Elijah Wood. It’s a decent feature, but it’s unfortunate that this is the sole feature. 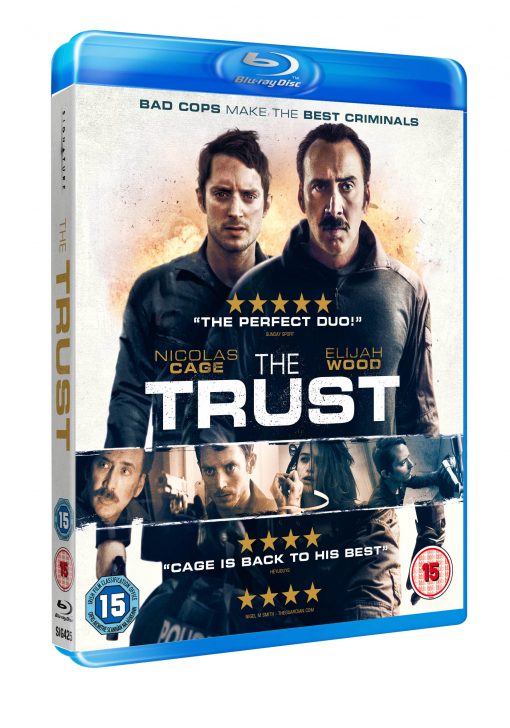