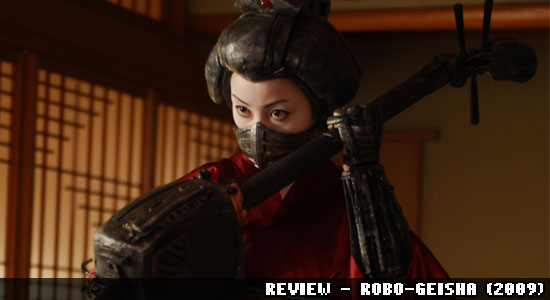 To help them achieve their goal of taking over the world, a megalomaniac Japanese businessman and his son recruit a vicious gang of Geisha assassins. These include two feisty sisters with an amazing range of surgically added weapons. But when one of these Robo Geishas refuses to kill an innocent group of ex-employees, its butt-blades versus wig napalm and machine breasts against killer-cleaver socks as the assassins take on the Geisha’s in one of the most mind-bending movie battles of all time… 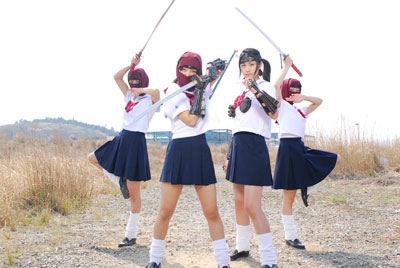 2008’s The Machine Girl by Noburu Iguchi seemed to have kickstarted the floodwave of shot on video Japanese gore and exploitation. Robo Geisha by the same director in 2009 isn’t likely to fly as high though although the demand for the titles will surely make a respectable number of units fly of the shelves. Twisted, quirky, dramatic and not outrageously gory enough, the film doesn’t walk this tightrope very well and only partly lights up bigtime. 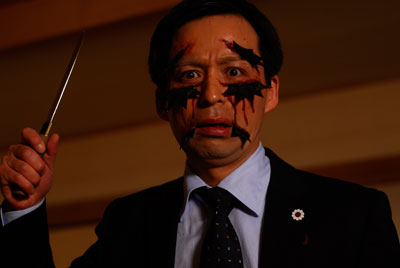 The alert quickly goes off during the opening of the film. Faced with a 100 minute running time and getting sights such as cheesy computer generated blood, assassins wearing masks that are oddly phallic in their design, one constant theme of Iguchi’s film is the wild imagination working sporadically and often falling flat on its face (the inclusion of butt-blades, wig napalm, machine gun breasts, buildings that bleed and breast milk from hell sounds more fun than they overall are in execution). There seems to be a desire to provide the viewer with a comic book fantasy turned up to 11 but since he movie is rather limp at points despite trying its hardest, it’s a shame more outrageous gore wasn’t part of the design. And I recognize that the mix of quirky humour, the drama between the sisters and the rest of the twisted shenanigans being included all around said elements is a choice and it’s all not meant to be taken seriously but it’s all also kind of embarrassingly cheesy and again, even when taking the gore to painful, disturbing levels we’re not treated to as much physical effects as needed. The CGI blood may in concept work fine alongside the cartoony side to Robo Geisha but not all audiences are twelve years old. 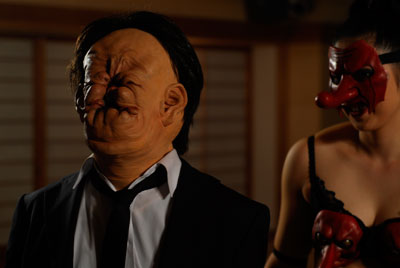 Robo Geisha comes equipped with a great exploitation concept but doesn’t have the balls to be more shameless about it. Thankfully not trying to be important with its content, Noburo Iguchi does deserve kudos for some of the energy in the film that unmistakably shows signs of promise in a market of Japanese video gore flicks that is quickly becoming very full. I would’ve liked to have been stuffed full with Robo Geisha but it’s merely a way too long afternoon snack… with little snack.