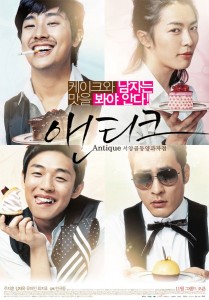 South Korea deserves a little love at the 2010 Terracotta Far East Film Festival and Stoo did indeed take the chance to take IN the 2008 comedy/musical. More on it below:

After suddenly quitting his job, Kim Jin-Hyeok (Ju Ji-Hun) decides to open a fancy cake shop called “Antique”, much to the surprise to his family as Jin-Hyeok openly hates anything sweet! His reasofor doing it though is to lure beautiful women into his shop so he can chat them up. He hires a highly talented pâtissier who also happens to be a “Gay Demonic Charm”, his looks and talent entices men, gay or straight! The team soon grows with a young boxer with a healthy appetite for cakes becomes their assistant. Everyone soon discovers a piece of Jin-Hyeok’s past when his family bodyguard turns up to look after him “The 4 Tasty Guys” business rockets, but there is a subtly brewing storm which takes you an unexpected direction…

Min Kyu-dong (Memento Mori) delivers a great, heartfelt comedy with musical montages and many delicious desserts that I won’t even attempt to spell. Based on a Japanese Manga entitled “Antique Bakery” (which has also spawned a Japanese television series) and this movie is also being touted as one of the most successful Korean movies ever made. It’s not all sunshine and lollypops however as there is a subplot of missing children turning up dead and our lead Jin-Hyeok struggles to sleep after continually being haunted by nightmare creatures (Ed Note: Sounds like a multi-mood experience a la Hong Kong then!)

It might not be a film for the blokes and don’t recommend this movie to your football buddies over the latest Tony Jaa action piece! But, ladies (along with their man?) taste and enjoy!