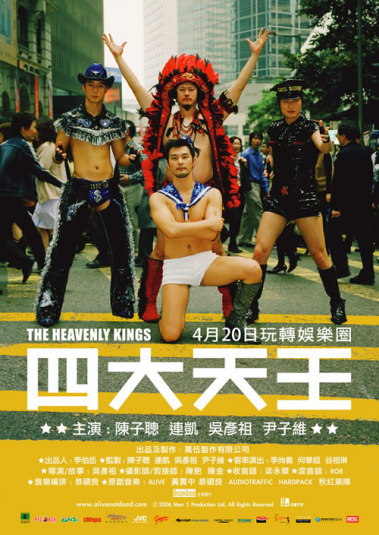 Plot: Four Heavenly Kings is about four semi-famous actors (Daniel Wu, Andrew Lin, Terence Yin & Conroy ‘BaBa’ Chan) whom decide to form a boy band – “ALIVE”, although only really Terence can sing. With the help of computer technology they manage to make a plausible track “Adams Choice”, they try and get a contract going with a big music company. The company offers them a contract, but they a 10 year contract and 50% of all the money they make.

None of them want to do this for the next ten years so they instead they come up with a rather in-genius plan to make them famous. Although with their fame growing and with band arguing amongst themselves, can ALIVE survive?

Review: Daniel Wu pleases the world with this modern day mockumentary. Not familiar with the term? A mockumentary is presented as if it were a documentary recording real life, but is actually fiction. So everything you see in film is staged, well apart from press meetings, the concerts and press interviews. It’s true, two years ago (2005) they really did release the single Adams Choice over the internet and performed three live concerts.

Many of Hong Kong’s biggest singing stars even appear as themselves giving their thoughts and feelings on the music business. The stars include; Nicholas Tse, Jacky Cheung, Candy Lo, Stephen Fung, Ella Koon, Karen Mok and Miriam Yeung.

Some notable actors also appear in the movie but as characters rather than themselves, Jo Koo appears as ALIVE’s biggest fan, David Lee Wai-Seung & Tony Ho Wah-Chiu appear as celebrity stylist who changes his opinion on what ALIVE means every time they change their ridiculous costumes.

Very brief appearances are made from Jaycee Chan, Josie Ho and even Jackie Chan at the very end during the ending credits, it’s quite amusing too.

Daniel Wu also provides some rather weird animated skits, photo cut out’s of the band members inside Daniel Wu, killing him. Andrew Lin in a Matrix-like sequence, another with Conroy crushing his fans and Terence’s animated sequence is very, very…disturbing.

Final thoughts, this has be a must purchase, it’s a great film, it doesn’t drag, your left with a feel good factor after the ending credits role. Cheers!