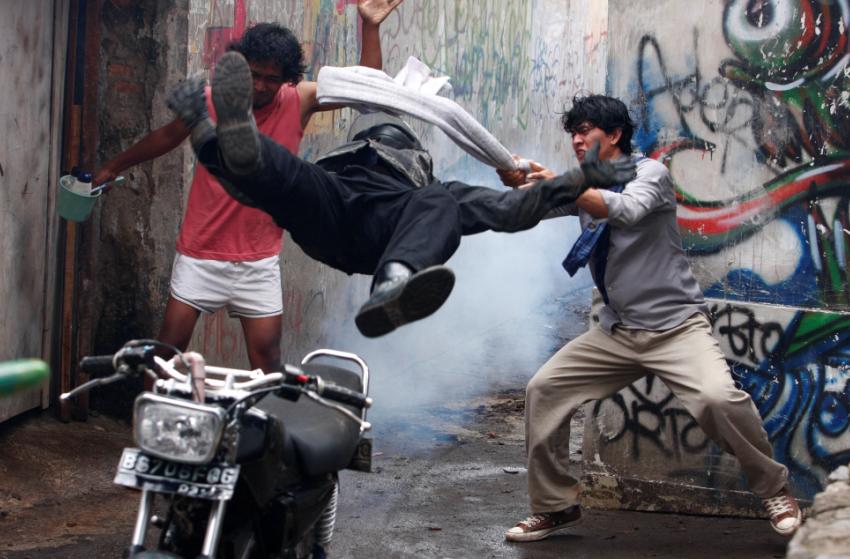 Silat practitioner Yuda travels from his village in West Sumatera to Jakarta with the ambition to teach Silat. He befriends a young pickpocket and his older sister after defending them against a sleazy night club manager. Although the bad blood between Yuda and the club manager leads him onto exposing a human trafficking ring led by rich business man; Ratger.

Fresh face actor Iko Uwais will easily come across as a Tony Jaa clone and yes this movie comes across as a simple as many of the Thai Action movies we have seen in the past five years. To be honest we all have one reason to watch this movie right? Action!

The action in the movie is adrenaline pumping! Although you do have to wait through the first half of the movie before it takes off! The action is intense, creative and choked full of harsh stunts. The final fights between Iko Uwais, Laurent Buson (fight choreographer) and Mads Koudal (an extra from 50 different movies from Denmark) are insane!

The movie really just appeared out of nowhere, before it’s scheduled release it was only really known for its popular YouTube trailer and then discovering that the movie is the second feature film from Welsh director Gareth Evans. Very bizarre yes, it should be a bad movie, but, DAMN the action is good!

Final thought? Decent flick, the story and its developments are stupid, but just enjoy the ass kicking!