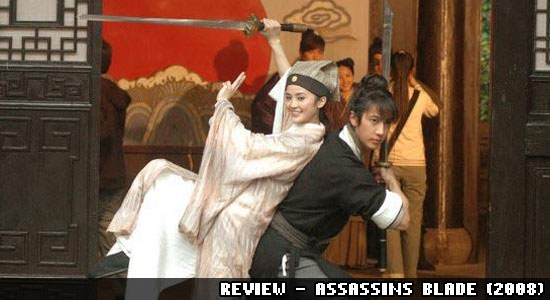 Assassins Blade tells the fable of Zhu Yanzhi (Charlene Choi), an adventurous young girl who poses as a man in order to get taught martial arts from the best. She taken under the wing of schools “Big Bro” – Zhongshan (Wu Zun), after Yanzhi’s identity is revealed a beautiful relationship blossom between the couple. Although Yanzhi is unaware that her family has already prepared an arranged marriage…

Jingle Ma delivers a light hearted romance martial arts. When originally released in Hong Kong back in 2008 the movie was known as “The Butterfly Lovers”, but with the UK release it needed spiced up a little, hence “ASSASSIN$ BLADEZ$Z!” retitled and the Curse of the Golden Flower style cover art. The story of the butterfly lovers has been reincarnated, time and time again with movies in crossing over the 1930’s to the 1940’s. Has this 2008 update done them justice?My honest opinion would say this movie is easily forgettable fluff!

Charlene Choi plays her role with ease and remains cute in the meanwhile, although the fresh faces of Wu Zun and Hu Ge leave little impression on me, if any. Thankfully the martial arts in the movie is impressive, but martial arts is impressive art to begin with! At the helm of this movie we do have the great Tony Ching Siu-Tung.

People will raise their eyebrows at the sight of some movie veterans lending their names to the movie, Ti Lung makes an appearance as Choi’s father, Lungs son Shaun Lam actually plays the clumsy “Herbal Head” in the movie. Hung Yan-Yan has a cameo appearance as the Kung Fu schools leader. My estimation in the movie immediately risen after seeing Fan Siu-Wong step in shot, although after getting killed off in the same scene, the estimation plummeted.

This movie will have to be a Rental and this suggestion is aimed towards our Charlene Choi fan base.