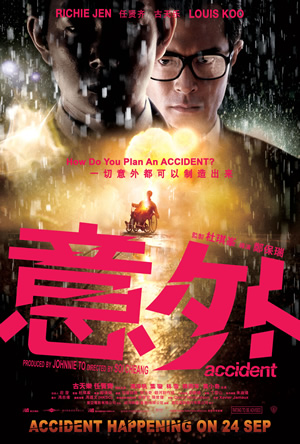 The latest of Stoo’s reviews of movies seen at the 2010 Terracotta Far East Film Festival. This time for the Johnnie To produced Accident, directed by Soi Cheang (Dog Bite Dog).

Ho Kwok-Fai (Louis Koo) is the “Brains” of a elite group of killers who they stage and execute elaborate assassinations which looks like nothing more than a tragic accidents. When performing one of their horrifying master plans, the tables suddenly turn when Ho narrowly escapes a so called “accident” that leaves 2 dead and 8 injured. The lines between their staged assassinations and genuine accidents become blurred leaving Ho Kwok-Fai with a growing fear… or is he just paranoid?

Dog Bite Dog director Soi Cheang directs a greatly well thought out story with a great cast and a sadistically haunting soundtrack to follow for Johnnie To’s Milkyway. Louis Koo’s team is made up of three other people: Lam Suet, Stanley Fung (veteran of the “Lucky Stars” movies) and Monica Mok. Our other leading actor is Richie Ren (Breaking News), you could consider him to be our antagonist but to be honest, Louis Koo is pretty much a antagonist as well! The are assassinating anyone if the money is right, so no real heroes right? Very noir. Soi Cheang continues to shock his audience, both Dog Bite Dog and Shamo have shocking violence and Accident matches with the horrific executions of accidents. The bangs, snaps, grunts and screams shook me to the core!

Rounding this one up, Accident has really given Soi Cheang a Johnnie To edge to his work that is his own and I welcome it!