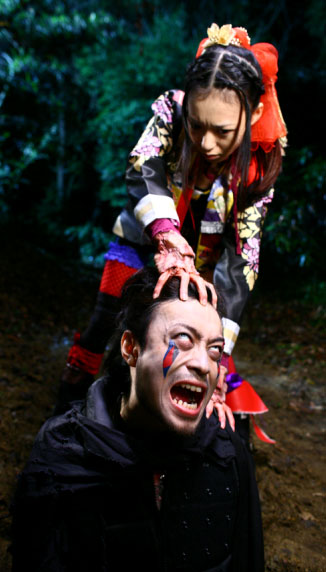 The story is set in an alternate world where andriods roam the countryside looking for victims they can rape (don’t worry it’s all insinuated) and turn into some kind of gore art. Adult film star (yes that’s correct) Ainu Kashi plays a young woman who was the victim of previously mentioned andriods and gets turned into one herself so she may seek vengence for herself and her friends.

Overall I would say this is a fun film. The low budget can be a bit off putting to be at first and 95% of it seems to have been shot in a generic woodland area which could’ve been somewhere in Japan or the southdowns. That makes it look even cheaper.

But as I said earlier don’t be put off. The film gathers pace and the fun begins in due time. You get some regular gore, garden shears for a foot, chainsaw leg, detachable breasts that become a powerful explosive, colourful and extravagant costumes, a mad scientist, guitar so powerful it can kill you, girls in different coloured tights (if that rocks your boat) and a sex scene for those of you who must see breasts in a film.

To put it bluntly Samurai Princess is a fun film where you can switch off and watch some gore action. If you enjoyed Tokyo Gore Police you will most likely enjoy this too. But take my advice and don’t get your expectations too high.