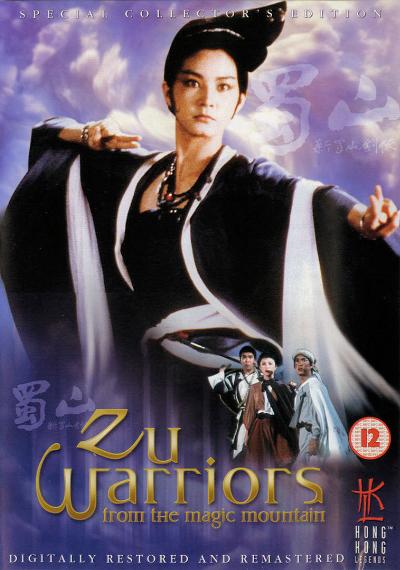 Note; This is when I first started reviewing, when glancing over it looks pretty dire. I apologise now for completly leaving Brigitte Lin out of the review. A possible re-review in the future.

Plot (HKL Edition): Featuring an all-star cast led by acrobatics genius Yuen Biao, ‘Zu Warriors’ depicts the adventures of a young solider caught in a war between two rival armies. To escape certain death he takes sanctuary in a cave within the ominous Zu Mountain, where he becomes entangled in a battle with supernatural forces threatening to destroy the world.

Guided by a mysterious swordsman (Adam Cheng), Biao must harness the power of two mystical swords; the only weapons on Earth capable of defeating his omnipotent enemy.

Review: Zu Warriors, defiantly not your normal HKL flick. This being the first Sword play movie I watched, I was amused by Yuen Biao ending up turning his own army against him. Biao takes refuge to a small boat near by, the owner of the was actually the ‘Buck Teeth So’ from the old black and white Wong fei-Hung movies. Biao soon comes across an solider from a rival clan (Sammo Hung) the two battle for mere seconds until they realize that both out numbered by a large army of soldiers draped in Yellow clothing. Biao and Hung abandon ship and swim away to safety. Once re-coping after the swim Hung and Biao are then caught up again between three other arms ‘Orange’ ‘Yellow’ and ‘Green’. This all ends up leading to Yuen Biao being knocked off of a cliff, by accident of course.

This film was very complicated when I first watched it. I was kind of put off by its ‘special effects’ yet I don’t blame them for those effects must have top notch in ’83. The main character of this piece are Dik Mingkei (Yuen Biao), Ding Yan (Adam Cheng), Hiu Yu (Damian Lau), Yat Jan (Mang Hoi) and Morning Flower (Moon Lee).

Ding Yan makes his appearances coming to Dik’s rescue against some ghouls. Ding finishes off the enemies with ease. Ding Yan seems to be the Cool, admirable ‘playa’ with certain skills of the sword.

Soon after Ding Yan’s introduction Hiu Yu and his dim side-kick Yat Jan. Yat Jan is an innocent, yet dumb character of the film, where every one at one point shows their sympathy for him.

The two groups both realized they were both brought here to meet Long Brows (Sammo Hung). They two groups suddenly come against the Evil Sect. (led by Corey Yuen Kwai and Fung Hakk On).

Now leading from two minor enemies to the bigger fish. The Demons Soul! The DS does have a forum are pacific actor, yet he takes possession of Ding Yan after him being poisoned by the Demons Blood (it’s a long story).

The main woman of the piece is portrayed by Moon Lee, after half way through the movie. With Lee’s youthful looks (only being the age of sixteen). She doesn’t hide any feelings for either of the leading characters, cause she doesn’t have any! She casually attacks Yuen Biao with her fists of fury. At one point she hesitated for a moment when she went to strike Mang Hoi, and decided to strike Biao instead

My Final thought to the movie is clear. Zu Warriors is a fine example of Fantasy movie. Thought it seems more dark than The Swordsman and New Dragon Gate Inn. Yet with the films young youthful cast has brought it into the star light and its not going to move any time soon.