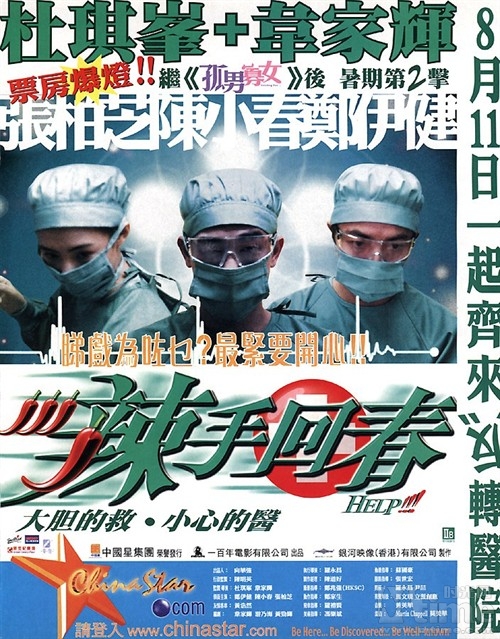 Plot: Yan (Cecilia Chung) is a young doctor at Kau Kei-Ho Charity Hospital. The Kau Kei-Ho hospital is in a terrible state, the doctors don’t do their job, they choose to help the hardly injured patients rather than the serious ones! When patient was comes in after being struck by lightening the doctors and nurses attempt to unload him onto other departments, but no one wants him! Yan finds the sizzled patient and discovers that he is actually man who owns the hospital ‘Sir Kau Kei-Ho’! (Lam Kau) He pleads Yan to turn things around, make the hospital a hospital and not an embarrassment!

Unable to change things herself she convinces greasy haired slacker doctor Jim (Jordan Chan) to help. Although Jim admits he won’t be able to make any difference with out his old colleague Joe.

Joe (Ekin Cheng) left the hospital a few years back, Joe had made a pact with Jim. If the hospital demanded reform, they would resign, so Joe resigned where as Jim said he did but he sent a Christmas Card instead. Since then Joe doesn’t want anything to do with weak willed Jim.

She chose to become a doctor because Joe & Jim saved her life from appendicitis when she was 14. She promised to marry the doctor that shouted “It’s not easy being a doctor!”, although due to the anesthetic she can’t remember which doctor it was.

Yan’s intriguing story convinces Joe to return to Kau Kei-Ho, although will the ‘highest management’ allow it?

Review: I have to say I think this films a great comedy, it does kind of feel like a series of sketches but works well. Some movies can pull off the crazy over-the-top gags, this movie can! Were No Bad Guys can’t unfortunately, I had a soft spot for that film.

Ekin, Jordan & Cecilia make a good trio, heck I think the combination of Lam Suet & Hui Siu-Hung was great! I loved the shot where the shadows they were casting were devils! Heck their characters even had amusing names: Leon Lai & Andy Lau!

The deal with the Highest Management is also quite amusing, everyone is scared of them and anyone that takes them on ends up in a stretcher! The only person who seems to have the guts is ‘Kau Kei-Ho’.

There is an amusing storyline about how Yan saved the live of a choking beggar. The beggar now determined to make Yan love him he goes from being a beggar to a wealthy young Raymond Wong look-a-like! But the only thing that never changes it his crotch itch!