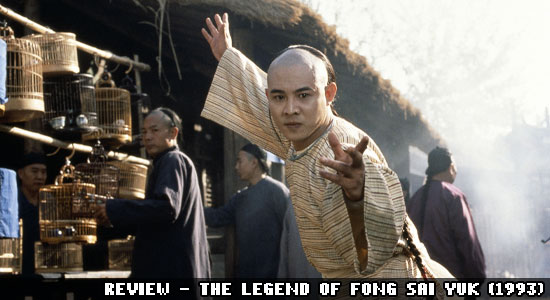 Set in China’s Ching Dynasty, The Legend of Fong Sai-yuk tells the story of a ruthless emperor who enslaves his people, and persecutes a courageous revolutionary group that is mobilizing to destroy his powerful regime. When young folk hero Fong Sai-yuk (Jet Li) discovers that his own father is a freedom fighter who has been targeted for retribution, he embarks on a heroic quest for justice that will unite his people and create a legend that will never be forgotten.

The crazy editing, mad comedy and a ton of wire work could easily put alot of people off of this movie, but I think it works in its favour. Josephine Siao is bonkers with her anime style reactions and I love her for it, from the top of my head I’ve never seen her in any movies outside of the Fong Sai-Yuk movies and I would really love just to keep that image of her as the crazy mother who has a lesbian affair with Sibelle Hu in my head.

Jet Li even gets to show a little cookie-ness, the scene where he’s cross dressing always gets a laugh from me.

The action is very unqie there is some great combat between Li and Chiu. As well as the fore mentioned wire work, you can point and laugh or you can appreciate the intricate minds that came up this work. Obviously with Jet Li and Corey Yuen working you could easily tell Corey brings the best out of Jet which can be backed up with the back catalogue of movies they’ve worked in together.

Overall the movie is a key example of the amazing genre mixture of movies Hong Kong released in the 90s.