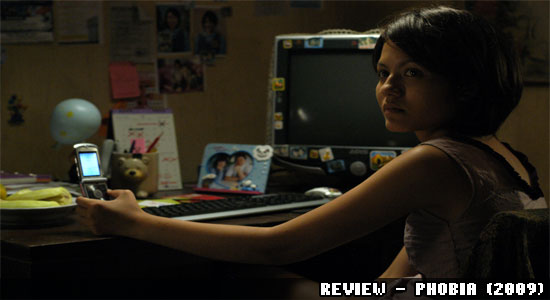 Thailand deliver a two hour movie made up of four twilight zone horror stories from four of Thailand’s promising directors, none of which I would even dream of pronouncing.

In our first segment “Happiness” we are introduced to housebound teenage girl who spends the day texting on her mobile phone her friends. She receives a mysterious message from a young man, but everything is not what it seems to be! Ooooh! Our second story “Tit for Tat” is a Final Destination revenge short where high school bullies each have a grizzly murder awaiting each and everyone of them. “In the Middle” tells the story of four guys going rafting which ends with the group loosing one of their friends. The last segment “Last Fright” we see our most interesting piece, where a air hostess caters to a snooty princess, only to end up poisoning her!

If Phobia was made to scare it fails, the first segment gives the crowd a wee spook with the quick cuts and loud shocks. The second segment is spoiled by it’s dodge animated zombie monsters and the third segment was alot of tripe.

The fourth segment – Last Fright directed by Parkpoom Wongpoom who is known for his successful Thai Horror flick “Shutter”, which was remade in a US horror starring the bloke from Dawson’s Creek, no, not that guy. The only thing that really spoils the story is when in the last segment they try to intertwine the storyline, but this is only between the last two segments being held together by a piece of throwaway dialogue.

To me, Phobia was a let down, but in Thailand it was a hit! Phobia 2 has already been released and we’re expecting it’s international release by the end of this year. So it maybe just my opinion, but that’s why your reading this, to find out my opinion amongst this horrible grammar! Rent it if anything!