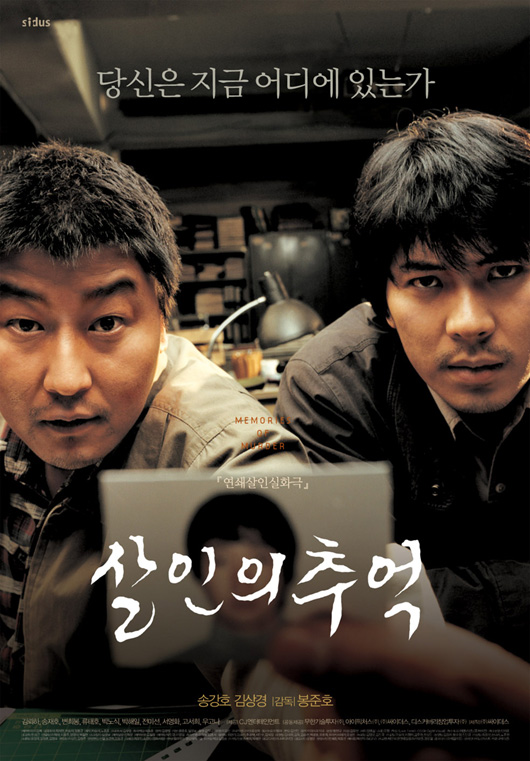 Plot: 1986, set in South Korea two local detectives, Park (Song Kang-Ho) & Yong-Gu (Kim Roe-ha) are put on the case of a body found in the countryside. The body was of a young woman who had been strangled by her stockings and underwear. Both Park and Yong-Gu lack experience in this situation, their quiet clueless actually. To help them with their case the cool and content – Suh Tae-Yun (Kim Sang-Kyung) from the city capital has been sent to help them out.

As the begin to slowly progress with their case, more bodies begin to appear and some patterns are beginning to form, proofing their they are in fact dealing with a twisted serial killer.

Review: Once again I’ve put off from watching this movie as I wouldn’t know if I would enjoy it or it’s two hours and ten minutes running time. Finally sitting down to watch I found myself amazed by this brilliant mystery thriller. I loved the crazy theories from Song Kang-Ho especially for the reason that they can’t find any pubic hairs, because it’s baldy monks that could have done it.

Park and Yong-Gu spend half of the time just trying to find a scapegoat out of this case. Examples include them deliberately framing the ‘retarded’ kid by making foot prints at the crime scene matching his shoes. Then threatening to bury him unless he tells them his confession, although his story is a little too convincing. The other example is the strange family man who travels out to the woods to … over … The chase between that man and the three cops was great, when they thought they had lost him but Yong-Gu actually managed to do something useful for once.

I must say the performances from the leading three men is great, Song Kang-Ho I knew already, I expected a good performance from him. Kim Sang-Kyung was brilliant, the final scenes with him at the railway with the suspect, holding the gun down at him in the rain, it was a brilliant moment. Oh and Kim Roe-ha does some pretty good kicks!

Final Thought? The story is brilliant, plenty of twists and turns! Enjoy!