Plot: Ryu Saeba (Jackie Chan) is the number one guy when it comes to being a private detective and professional girl chaser, with his partner Makimura (Michael Wong). They make a indestructable duo, until Makimura dies! In Makimuras last words he plays with Ryu to look after his younger sister Kaori (Joey Wong). Although Makimura only has one request, “Keep your hands off her!”.

Saeba agrees with Makimura, until he notices that Kaori is a stunner! Saeba holds a strong face and treats her more of a sister than a girlfriend, yet she is mad for him!

One day Saeba is approached by Mr. Imamura, head of the Imamura Newspaper Company. His daughter, Kiyoko ran away after a family desput, leaving Saeba on a trail to bring her home.

Ryu Saeba ends up on a luxury cruise with Kiyoko and Kaori too has come along, but with her puny twat of a cousin. Which is quite sick when you find out he is in love with her!

Little do they know that the cruise is being taken over by Cornel MacDonald (Richard Norton) and his group of masked terrorists. Although Saeba isnt the crime fighter aboard! Tramp Kao-Ta (Leon Lai) is a fast handed card slinger. There is also sassy cop (Chingmy Yau) and her no-brained big breasted side kick! With this fighting force, they plan on putting MacDonald behind bars, before its too late! END_OF_DOCUMENT_TOKEN_TO_BE_REPLACED

Personal Thought: It’s the future. People are on Hover boards, Mobile Phones are at your finger tips, no really they are! This film is filled with wire work and CGI effects which is some times on the good side and the bad. Yet if you aren’t a fan of the CGI and wire work maybe the cast will interest you; Alex Wang (Chinese Strike force), Stephen Fung (Gen-X-Cops), Chin Kar-Lok (Operation Scorpio), Gigi Leung (First Option) And Kristy Yeung (Storm Riders). Apart from the young there is two classic actors included Sammo Hung and Yuen Biao!

Now lets get this party Started Nova (played by Alex Wang) is an hyped up teen spending his days street fighting in and outside of tournaments raising money for the one thing. The Power Glove. His Father ‘Thunder’ (played by Yuen Biao) supposedly killed a couple year back has left a hologram of him demonstrating the deadly art of Power Fist. Although his mother (played by Cecilia Yip) is against him using The Power Fist technique and is very against him getting a Power Glove. The Power Glove is known unlock the full use of the human brain, fact is that we only use 10% brain power. The Gloves were only issued to certain police officers, one of those officers was Thunder the others where ‘Dark’ (played by Sammo Hung) and Combat 21 (played by Roy Cheung) who turns out to be the main protagonist of the film. END_OF_DOCUMENT_TOKEN_TO_BE_REPLACED

Chan Tai-Hung (Dicky Cheung) is a lonely school student who is down on his luck at the moment. His sister Chun May (Chingmy Yau) is admired by most guys, whilst his mother is canoodling with her love interest, Richard (Richard Ng).

One night Tai-Hung is confronted by three bizarre looking men, these men turn out to be ‘The Future Cops’. A group of crime fighting heroes from the year 2043, sent to protect the young judge Yu Ti-Hung. Although Tai-Hung doesn’t have a clue who he is. The FC are protecting Yu Ti-Hung from the dredged ‘General’ (Ken Lo). The General is on trial and is presumed to be executed if the Judge says. END_OF_DOCUMENT_TOKEN_TO_BE_REPLACED

Jet Li returns as Wong Fei-Hung for Wong Jing in this comical piece of work.

Fei-Hung arrives in Hong Kong awaiting the arrival of his Aunt Yee, but no luck. Whilst waiting a group of outlaws know as ‘The Boxer Association’ attempt to leave Hong Kong and travel to Canton. After being recognized the attempt escape from the station, although the handy Wong Fei-Hung is able to put the three in their place, whilst holding a bouquet of flowers.

Soon returning to his beloved Po Chi Lam Pharmacy, currently ran by his students, Ah Fu & Ah So. Although there is one problem…Space, the building is so cramp. After a sound suggestion from one of his Landlord, they plan moving Po Chi Lam to a larger building. Ah Fu & Ah So ends up finding a great building with lots of space and very cheap rent! But with all these good features, where are the bad ones? Oh Yeah! it’s next to a brothel!

Although there is another problem brewing in town. For some reason, the women from brothel are disappearing in groups. Although Ah Fu & Ah So soon find out that the women are getting smuggled across sea’s by a group of corrupted monks! Also meeting a deranged officer ‘Master Lui Hung’ which ends up setting Fei-Hung against a notorious Robber, who’s been done for robbery and rape. Although Lui Hung deliberately sets him free, leaving Fei-Hung to clean up the mess. END_OF_DOCUMENT_TOKEN_TO_BE_REPLACED 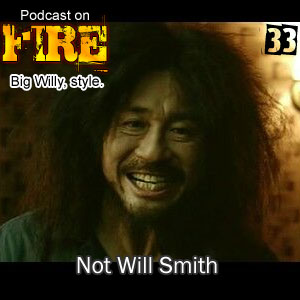 The next Cast From The Past (a series of shows lost from our iTunes feed and website) from 2008 features Stewart Sutherland, Kenny B and Mike Banner. Talking last movies watched (including the zany Millionaire Cop), we also tackle topics such as Old Boy being remade, how to properly do a remake and are there any good Lunar New Year Hong Kong movies?

Cast From The Past: Podcast On Fire 21 – Cut & Paste Edition 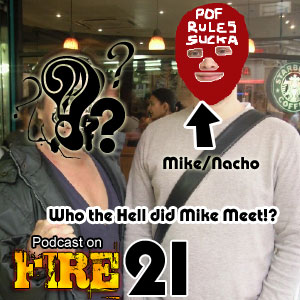 The next Cast From The Past (a series of shows lost from our iTunes feed and website) from 2008 features Stoo, Mike Banner and James Aylmore. Talking last movies watched (including the requisite Shaw Brothers selection from Mike), listener questions about among other things Wong Jing and Mike tells the tale of which Hong Kong screen fighter he met (and stalked).

Cast From The Past: Podcast On Fire 6 – The Magnificent Trio-banter 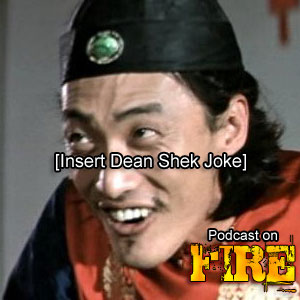 The next Cast From The Past (a series of shows lost from our iTunes feed and website) from 2007 features Stoo, Ken, and Mike Banner. Discussing Mainland Chinese stars in Hong Kong movies, pro’s and con’s of remakes, censorship, favourite Stephen Chow-moments and the pro’s and con’s of Wong Jing. Last movie watched includes Snake In The Eagle’s Shadow and King Boxer.