Taking place 22 years after the events of Alfred Hitchcock’s Psycho – Psycho II tells the tale of Norman Bates (Anthony Perkins) as he is deemed mentally suitable to return society and return to the Bates Motel.

Through the help of his doctor (Robert Loggia) and some nice Christian folk, he gets a job at a local diner and things appear to going well when he befriends a young waitress called Mary (Meg Tully). Then Norman receives a phone call from his mother… END_OF_DOCUMENT_TOKEN_TO_BE_REPLACED

Focusing on thoughtless father Seok (Yoo Gong) and his daughter Su An, boarding the KTX train to Busan to reunite Su An with her mother. Meanwhile the streets of the city are ridden with riots, people viciously attacking one another with no cause behind the outbreak. When the final passenger boards the train and collapses stricken with a mystery virus – the passengers of the train soon find themselves fighting for their lives against a crazy of blood thirsty animalistic zombies!

The group of survivors include a colourful cast of characters including a pregnant couple – the hard knocks husband and his heavily pregnant gentle natured wife, a pair of elderly sisters and a young pair of star crossed lovers. Throw them into the mixture alongside a homeless dude and a fearful CEO businessman and we’ve got some drama! Whilst there is plenty of characters in the film, you’ll find yourself falling in love with some of them, these are some of the folk you want behind you in a zombie apocalypse, and then there’s some that actually more repulsive that the zombies!

When it comes to crunch/munch where our leads have to proceed from train car to train car to reunite themselves from their separated loved ones – this is where the film really comes to life for me. It is as if we’re watching a video game play out in front of you, watching the characters progress from level to level, how they overcome situations, who dies along way!

Another real surprise what the subplot of the change in the business class, that was horrifying to watch, I won’t give it away. But as the plot carries on and the terrific organ music blares – it’s crazy, absolute nuts.

The drama and the tension of the film is well deserving of its title as one of the biggest Asian Blockbusters we’ve seen in years. Yeon Sang-ho has gained my attention after previously dismissing it with The King of Pigs. Yes, I am now very interested in seeing if the animated sequel; Seoul Station will keep to the standard that Train to Busan has set.

Overall, Train to Busan is a total blast! Great cast of characters, nail biting tension and a train choked full of zombies! What more do you need other than a bowl of Cinema Sweat Popcorn, right? Chew-Chew! 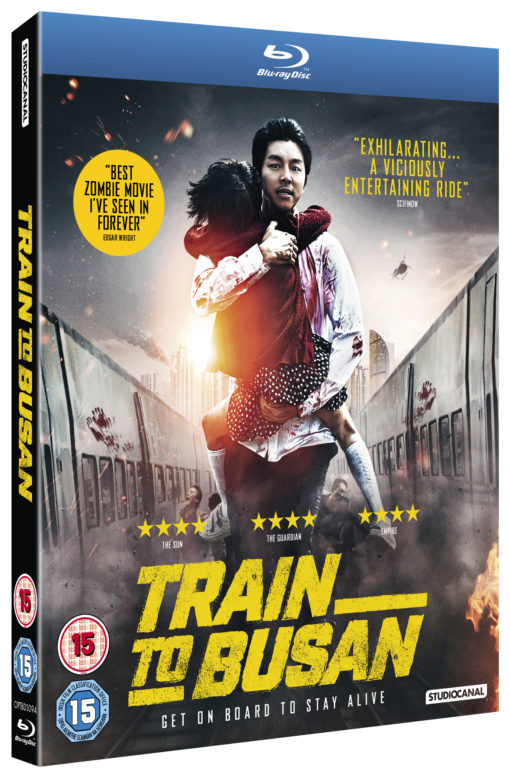 On the run from the evil an corporation, researcher Dr. Segawa  – is in possession of the Guyver; a space-age alien technology which can transform man into a futuristic kung fu fighting machine with superhuman strength.

When Segawa  is caught and killed by a mutant creature at the behest of Chronos Corporation, he out smarts them  by managing to stash the Guyver before his untimely demise.

Meanwhile Segawas daughter, Mizky (Vivian Wu) is informed of her fathers death a rogue CIA agent Max Reed (Mark Hamill), Reed has his own theories about Chronos and Segawa s involvement with the Guvyer. When driving to the site of her fathers death, they are unknowingly tailed by Sean (Jack Armstrong), the dim boyfriend of Mizky, who is under the impression that Max is trying to woo his girl, whilst spying he accidentally discovers the Guyver.

Sean, Mizky and Max now find themselves the next target of the Chronos Corporation and their group rag-tag group of mutant henchmen.

Man! The Guyver was nuts! How did I not know about this film prior to the Blu-ray release from Arrow Home Video? It is the perfect blend of mental make-up and prosthetic effects and campy acting and martial arts to mould the perfect 90’s B-Movie – something Canon would be proud of.

It’s a fun story and I was impressed with the costumes and effects, but I feel I probably would have loved this x10 back when I was ten. The mixture of that 90’s vibe; the music, editing effects and storyline would have made for a badass Sega Megadrive game.

I should have been well aware of that I was going to be in for a crazy viewing experience when the directing credits are by special-effects masters Screaming Mad George and Steve Wang. Whilst it is a fun action romp, it is fairly dated – surely there is clearly a following, whether its solely about Yoshiki Takaya’s manga or if there is a large following for this film – it’s a surprise to me. This rings true as a feature which should probably remained in the 90’s alongside VHS cassettes.

Arrow Home Entertainment honoured The Guyver with a blu-ray release in December 2016 delivering their usual high standards of presentation with a new digital transfer of the Director’s Cut, Original uncompressed audio and thankfully (because I’m a bit deaf!) English subtitles for the deaf and hard of hearing (again, me!).

Set in a small rural village, The Wailing follows the life of local policeman Jong-goo (Kwak Do-won) and how his quiet life is turned chaotic when a ‘mystery virus’ plagues villages causing a string of violent outbursts and brutal deaths.

When meeting with friends, locals point out a connection between the deaths and the arrival of an old Japanese man living in the outskirts of village. Jong-goo dismisses the claims as hearsay until his young daughter begins to show symptoms of the virus. After a severe violent episode from his daughter, Jong-goo takes the advice of his mother-in-law and contacts a shaman for help. That should solve their problem, right?

South Korean director Hong-jin Na, the man behind hit thrillers The Chaser and The Yellow Sea – blows our minds once again with this psychological thriller, perhaps horror which really puts Kwak Do-won character through the wringer! I mean, he gets it tough, always showing up at the worst time and having all the horrible nightmarish situations land on his lap – its slightly comedic at first, then bloody torturous as the story progresses.

Overall it’s a wonderful tale, a truly dark and disturbing tale. I was refreshing to see something break the mould in Korean Cinema – I love the Park Chan Wook and the Kim Jee Won thrillers/dramas as much as the next person – but director Hong-jin Na gave us a sinister twist that stuck with me for days after. It full deserves all of the awards it is currently raking in!

Based originally on a series of graphic novels from Gareth Ennis and Steve Dillon, in 2016 AMC commissioned a ten episode run adapted for television helmed by Seth Rogen and Evan Goldberg. How did it work out? We’ve gotten a hold of the Blu-ray, sit tight things are about to get biblical!

Preacher revolves around the story of Jesse Custer, a small town preacher from Annville, Texas. His world is rocked when he is struck by a cosmic wave of energy which leaves him with a very special ability, the ability to control people by his command. Jesse suddenly finds himself juggling several plates when Tulip, mystery woman from his past appears looking for him to do ‘one more job’, Cassidy, a vampire on the run who hangs around the church attempting to loose track of the determined vampire hunters tracking him and Odin Quincannon – Owner and President of Quincannon Meat & Power, and if you control the meat and the power, you pretty much run the town and hell Preachers church is probably the only piece of land he doesn’t own yet.

This show is a blast! It’s like watching Breaking Bad, but instead of drugs – vampires and religion! That’s underselling it, because it’s a surprisingly funny show with such excellent well written characters, yeah that’s about a dozen important characters and we regularly jump between three different decades, but it never becomes too much. 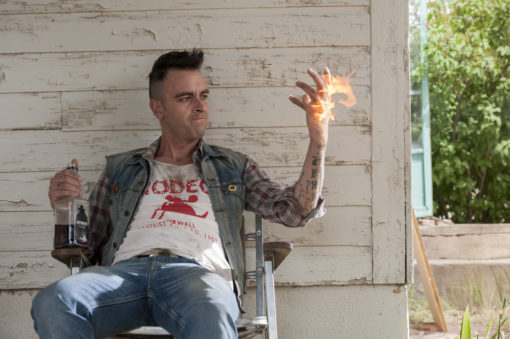 The casting of this show is perfect, everyone really makes the most of their characters, we’ve got such a diverse selection of such rich characters – no one is under written – even the dude that gets his dick shot off, aye even him. Dominic’s portrayal of Jesse is reserved and it works – the whole boiling kettle, he can be a real evil cunt if he’s pushed there. Joseph Gilgun is just playing himself turned up to 11, Gilgun has always played mental in films and Cassidy should have been a very fun and comfortable role for him. Even the antagonists are so perfect in their roles; Jackie Earle Haley is perfectly cast as this bitter man of power, with a horrid past – but hell of an actor.

Whilst there is buckets of comedic relief, Derek Wilson and the boys from ‘The Government’ are funny as hell. Wilson plays Donnie Schenck, the right hand man to Odin and the first man to feel the wrath of Preachers powers, as the season goes on you actually start to feel for Donnie he’s put up with a lot of shit from Jesse and even Tulip has left her scars on him. The Government Agents; Fiore (Tom Brooke) and Anatol Yusef (DeBlanc) have an excellent dry humour – the scenes where they are pacing around detailing the perfect tone of voice and opening line when answering a very important phone call is pretty funny. 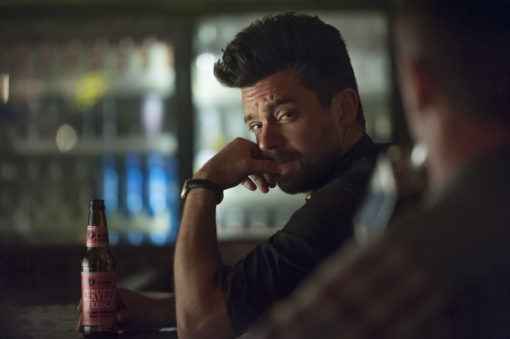 Overall the story runs quite well. The story is split across three different time periods – other than our main setting with Jesse Custer and his motley crew, we also follow a story set in the old west, a cowboy travelling to town to collect medicine for his ailing daughter. We’re also shown Jesses flashbacks of his father and their relationship with the church and more importantly with Odin Quincannon.

I cannot go and say the story was flawless, there were some instances when Tulip makes some bizarre decisions which I felt dented my enjoyment of the story – but I could have missed a reference or a sign, or hell maybe it is something they’re sitting on for Season 2. Speaking of Season 2, I felt the first season wrapped up very nicely at the end; all the loose ends were tied up, we’re getting to see our characters going in a new, fresh direction and we hopefully get to see a great looming threat. I was left excited itching to know more.

Sony Pictures Home Entertainment handled the UK release of Preacher: Season One on DVD and Blu-ray – and they did not disappoint with the Blu-ray special features. We’re given six segments and over a dozen deleted scenes. The Behind-the-scene segments such as; “The Unfilmable Pilot”, “Behind the Killing Machine: Saint of Killers” & “Chainsaw Fight Breakdown” – the segments are all roughly between 5-7 minutes and feature interviews with the directors (Rogen, Goldberg etc.) and primary cast. It’s an interesting show and getting over half a dozen special features compliment it nicely. The Extended and Deleted scenes are also nice little bonuses for those craving every morsel of footage – I recommend deleted scenes; Black Pudding  and Three Possible Explanations. 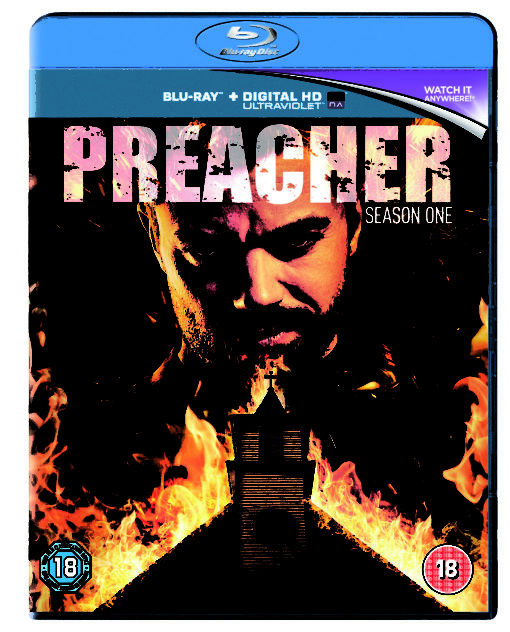