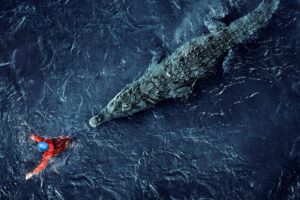 Coming to DVD this November, Black Water: Abyss tells the tale of two thrill seeking couples exploring a newly discovered cave. Their gamble pays off and when they discover a hidden recess underground which could equal a very lucrative business opportunity.

But their dreams are quickly doused when a sudden downpour causes the cave to flood and it’s only then our cave dwellers are introduced to the caves original inhabitant, one big f’n croc!

For several years now it has always been Sharks over Crocs, whether it’s The Shallows or the Sharknado franchise, but for the last ten years I feel the deadly creature genre has been all about the Shark! I feel the crocodiles haven’t had a decent bite since Lake Placid, 1999. Yet, fast forward to 2007, the original Black Water crept out on the scene giving y’all another reason to stay out of the water. Has it’s 12 year later sequel got as much of a bite as the others? Yeah, it does!

Killer croc movies don’t need to be the finest pieces of film making, they just need to be entertaining (I’m looking at you Sharknado 1-6, you too Crawl!), keep it between 80-90 minutes and I’ll be happy viewer.

The film handles suspense quite nicely; you’ve got five people trapped with rising water and a big ass croc wanting his tea – you shouldn’t need more right? Black Water: Abyss gives us extra, we get emotional depth from our characters and their personal relationships – it gets awkward at times – to the point, I’m surprised none of them just jumped into the crocs mouth to get out of those tense situations.

I appreciate the films editing, rather than overwhelming us with several CGI shots of crocs chomping down on gen-x’ers, we’re given intense close ups of crocs wrestling around underwater. So when the characters are caught in the water with the croc, it switches to those images – it’s simple, but effective.

As I mention above, this is the second instalment in the Black Water series, no, not to be confused with the 2010 movies starring Jean Claude Van Damme and Dolph Lundgren – it’s the 2007 horror film Black Water from writer/director combo; Directors: David Nerlich and Andrew Traucki.

Nerlich continued his career as a visual effects artist and Andrew Traucki stuck to his roots directing the likes of The Reef (Sharks!) and returning to direct BW: Abyss!

Altitude Film Entertainment will be releasing the film on DVD and Digital Download in November, the DVD itself does not have any special features.

Overall, it’s a decent watch, well worth checking out once – since the DVD lacks any real special features – I suggest you just watch the film when it turns up on one of the streaming platforms.