Renowned archaeologist Jack (Jackie Chan) and his team is approached by an Indian professor who tasks them to locate India’s lost Magadha treasure in snowy Tibet. Deep into their excavation they are swiped by a group of mercenaries led by Randall, a man claiming the treasure belonged to his ancestors and thus rightfully belongs to him. After a short scrap, Jack and his team are apprehended and left as Randall escapes with the treasure. The events that unfold sends Jack and his group on a fun filled globetrotting adventure!

Jackie Chan returns with Stanley Tong in simply one of the most puzzling films I have seen in recent years. Someone clearly made this film as a love letter to India and its rich culture.

I try to avoid reading any reviews or hot quotes on the films I watch and review as their words typically works their way into my review, but hell, the Los Angeles Times nailed it saying, ‘good luck trying to stop that goofy smile from spreading across your face’, the really summed up my mug throughout a majority of this film.

Whilst this might be a turn off for the large audiences who will be overwhelmed by the goofy nature and the outright cheesiness of some sequences – especially that ending. I think this would be a brilliant film to show a family. I would show this film to my children (dubbed in English etc.), I can imagine my kids having a ball at all the daft capers Jackie and his crew get into, it’s got animals (kinda), it’s got fun action sequences and silly comedy – a perfect combination for a family film on a rainy day.

One of the bizarre directing choices was the amount of computer generated animals in this movie. Throughout the story our cast comes across wolves in the artic, poisonous snakes, starved hyenas and a lion! All of the aforementioned animals were computer generated, was it a shortcut to avoid having to work with animals? Maybe cheaper just to have a studio add them in post-production. But, it looks tacky, especially with the heavy interactions with the lion and hyenas in the second half of the film.

Other than the animals – the film did not seem to cut corners on production – stunning locations, dozens of sports cars, all the fancy tech – I did feel a little let down to see that the cinematography was such low quality. I felt that it matched the standard of a soap opera, especially notable in the second half of the film. This film needs to be visually stunning – not an episode of River City.

In the last few years we have gotten to see Jackie get back into the proper action adventure genre again; The Myth & Chinese Zodiac for example. Each film comes with a small ensemble cast to support Jackie. Normally two supporting characters is enough, but hell, by the time they have reached Tibet there’s five characters excluding Jackie – each having a different ethnic/cultural background and they can only converse together in broken English – I feel this is where the audience suffer. Because, hell it gets confusing at time, when you think you’ve mastered all the characters, suddenly there’s three Chinese sidekicks – when did that third one show up!? ‘Ovey!

A small bonus was the brief appearance from the ageless Eric Tsang as an old cohort of Jack who gets called in for a favour.

Has Stanley Tong now repaid a favour to an Indian Prince? This unashamedly cheesy action adventure romp is one of the most colourful and earnest Jackie Chan film I have seen! I urge readers to witness it for themselves, maybe wait for Netflix though.

Kung Fu Yoga receives its UK Home Release from Kaleidoscope Entertainment and is out on Download 31st July 2017 and Blu-Ray and DVD 7th Aug. 2017. 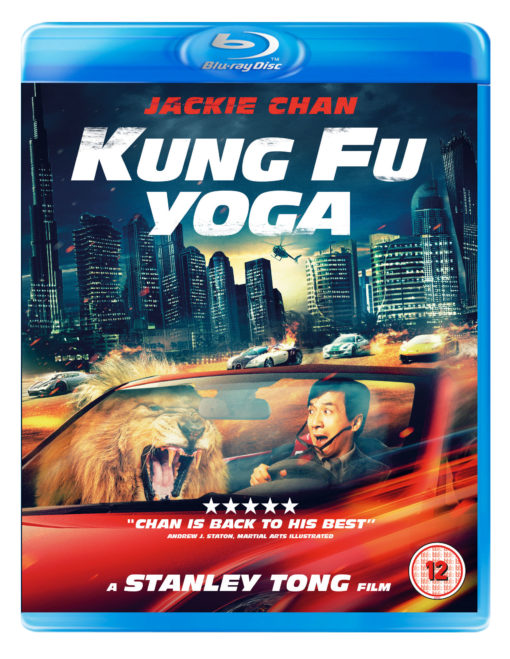