Set during 1962 amongst the chaos of Cuban Missile Crisis, Matinee tells the tale of shock director Lawrence Woolsey (John Goodman), the man behind several low budget black & white monster movies. The cigar chopping Woolsey travels from town-to-town with his patent ‘Atomo-vision’, an interactive movie experience which is used to fullest with his latest creature feature; MANT (Half Man, Half Ant!).

Whilst Woolsey isn’t as successful as the likes of Hitchcock, his previous work has capture the imagination of Gene (Simon Fenton). Gene and his brother live on a military base with their mother whilst their father is away with the navy. To escape their forever changing lives, they spend weekends watching monster matinees at his local theatre, much to the chagrin his little brother. IT is revealed that Woosly is coming to town and he’s bringing MANT with him – threat of nuclear missiles, teenagers and scary movies – what’s the worst that can happen?

I vaguely remember Matinee from my childhood, after being introduced to the likes of Gremlins from a young age, I have to imagine that Matinee was fed to me shortly after. I had memories of earthquakes, ant creatures and a balcony collapsing, when seeing promotional media for Matinee being published by Arrow – the film came flooding back in waves and I knew I had to revisit this ‘classic’.

The whole threat of nuclear warfare is a strange plot to have running in the background of the movie, but it makes sense at the time and clues in the gimmicks of Woosleys picture. The focus of the story is aimed more at teenage children, maybe young adults. Fans of John Goodman and maybe Richard Piccardo (the theatre owner) would eat this up. The focus of the film hangs around the children, making friends/fitting in at school, talking with girls and the chances of getting laid if country was on the brink of nuclear fallout. Kids stuff, right?

John Goodmans character is really the best part of Matinee, I loved every part of his character – for example the trailers teasing his features; it always shows him sucking on a cigar and his passion for the theatrical. His Atomo-vision and Rumble Rama is what all major cinema chains offer nowadays; 4D, DBOX etc.

Arrow provided us with a copy of Matinee on DVD for review. With over 80 minutes worth of special features on this release. Arrow produced new interviews with Joe Dante and various recurring actors, a making of feature w/ John Hora and Marshall Harvey. There is also a lengthy interview with Joe Dante taken from a French release of the film from 2011. Amongst the behind/deleted/extended scenes we’re given the complete feature of; MANT!, a six minute introduction from Dante and all of the footage shown originally in the background of the film is edited clearly into a 15 minute film along with the trailer shown in the film too. 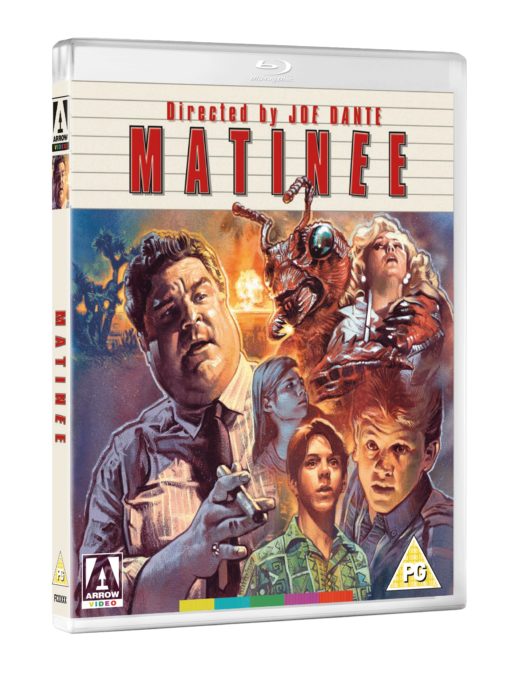