Tale of Tales tells us these fairy-tale stories of three royal families from three different kingdoms. In the Kingdom Darkwood, The King & Queen Longtrellis (John C. Reilly & Salma Hayek) are desperately attempting to conceive and birth a child and as a last resort they consult a necromancer for solution.

In the kingdom of Stronghold, King Strongcliff (Vincent Cassel), a serial womanise Lothario who has had his way with most of the beautiful women in his kingdom, when in search of his next conquest, he is overwhelmed by the angelic voice a woman in the kingdom, unable to see her from his castle, he could only tell where she dwells and insists on courting her. Little does he know the angelic tones belong to a pair of old wrinkly cleaners.

In the third tale, it follows the story of the King of Highhills (Toby Jones) and his daughter Violet (Bebe Cave). Violet is coming of a age where she is dreaming of meeting a suitable suitor to take her hand in marriage. Whereas her father gotten a sudden fascination for a jumping flea.

There, three spoiler free synopsis of the Tale of Tales. Trust me these stories become very interesting and dark as the tales unfold across three acts the stories run in the order of each showing us their first act, then second and so forth.

I was pleasantly surprised with this film, the stories are engrossing, funny and little naughty at times. This is my first experience of watching films from Italian director Matteo Garrone (Reality & Gomorrah) and my interest in his filmography has grown. The tag on the poster/home release should probably read GRIMM FAIRY TALES SET AMONGST A GAME OF THRONES.

The setting locations are stunning – everything is spotless and bold – in the first segment, where John C.Reilly is about dive in the water, the location and backdrop looks like something straight out of legendary french film-maker George Melies book, the curvature of the rocks, the period diving helmet etc. it’s fascinating. Set against the sunny backdrop of Naples, the imagery of Salma Hayek playfully chasing her son through the garden maze and the contrasts between the beautiful white stone walls and her long black and red dress – it’s very fancy!

Special features on the DVD include an rather appealing trailer for the film, thankfully it delivers – nothing worse than a trailer getting your hopes up and the film fails to deliver. We also have three interviews included with Salma Hayek (8 minutes) , Toby Jones (12 minutes) and director Matteo Garrone (17 minutes). Salma and Toby are given the standard questions you would expect, their familiarity the director and his body of work, how much input they had into their characters and how they were pleased with the final results. Salma tells a neat story of sharing a scene out of context with peer Bradley Cooper and he understood the situation entirely even though no lines of dialogue were uttered.

Garrone obviously gets the longest interview and he goes into great detail on how he sourced the stories from the famous Italian novel – the journey they took to find the ideal locations and what art and literature influenced his vision in the film. It’s a good set of interviews, the director is interesting and both actors seemed pleased with having the opportunity. 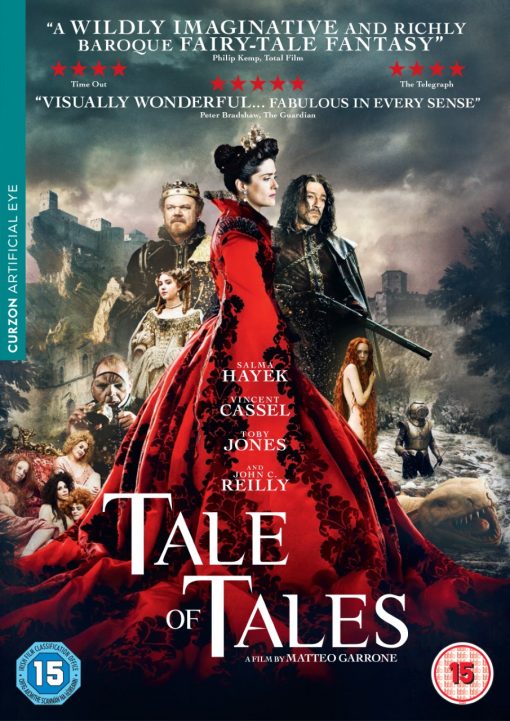 Tale of Tales is available on DVD & Blu-ray from Monday 8th August 2016.