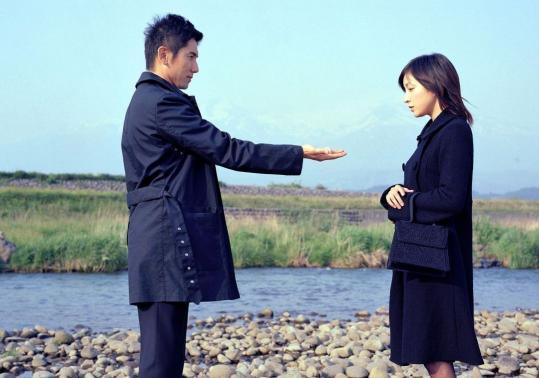 Masahiro Motoki plays Daigo Kobayashi, a cellist who becomes unemployed after his orchestra disbands. He gives up the cello and moves back home with his wife in hope of finding a new line of work. The couple return to Daigos childhood home, untouched after his mother passed away two years prior and his father, his father, who owned a Coffee Shop left his family to start a new life with his waitress.

He easily lands the job of a NK Agent in Departures, which he expects to be a Travel Agency turns out to be a n?kan (encoffinment) agency, where they prepare the recently deceased for their departure.

Y?jir? Takita directs this stunning drama which had me wondering only one thing going into this; Lets see how this movie earned that Oscar!

It’s important to mention that I watched this movie in two sittings, the film runs for 131 minutes. For the first hour I was given the impression that the movie was this obscure drama with hints of dark comedic moments. After watching the remaining half of the movie I was wrapped up in this heartfelt drama focussed on the development of the characters through each encoffinment, each becoming more moving than the last. By the time this movie finished I had broken down into tears twice, the amazing story portrayed by this outstanding cast and gift wrapped by an overwelming soundtrack.

The soundtrack to this movie is important, it’s so heartwarming and heart aching at the same time, only certain composers can cast this voodoo magic over me and it made complete sense when Joe Hisaishi appeared in the ending credits. Hisaishi is responsible for dozens of memorable movie scores for the Studio Ghibli Movies and a personal favourite of mine; Welcome to Dongmakgol.

One of the important things movie is the Japanese culture that it exposes us to, how society look down on the people who have this job of cleaning the dead, how this procedure is carried out in front of the deceased family rather than the expecting it to take place in a cold basement. Also the simple idea of turning a simple object into a moving plot device.

Departures is possibly the finest example of a Japanese drama that isn’t animated and I highly recommend this movie to EVERYONE!