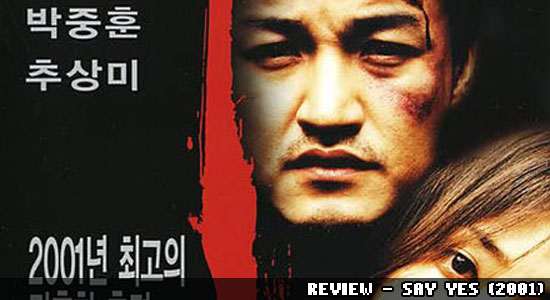 In celebrating their one year wedding anniversary, Jyung-Hyun (Kim Ju-Hyuk) & his wife Yoon-Hee (Chu Sang-Mi) decide to leave the city for a road trip across the countryside. On their travels they meet a stranger (Park Joong-Hoon) and offer him a ride. After a rather unsettling conversation the stranger leaves the couple, but begins to reappear everywhere the couple go and situations take a drastic turn of events when the stranger sends a message to Jyung-Hyun.

Kim Sung-Hong, director of The Trap, returns with this suspense creepy hitchhiking thriller.

I’ve had my eye on this film for a while now, after seeing it I was expecting it to be more like “The Shining” rather than “Halloween”. It’s not nessicarily a bad thing, I always like to think that the antagonist still has a pulse left in him. When hearing the plot I imagined it to be set in the forest with in a cabin surrounded by snow.

Park Joong-Hong’s deep rusty voice made him a excellent choice as the stranger, after being beaten down by Jyung-Hyun in the movie left him with a bitter resenting face to match his attitude. He explains his motives Jyung-Hyun early on in the movie, but as a decent man, honoring his marriage vows he tell’s him to get lost! That begins the sudden tumble of the downward spiral begins.

The story is quite good, you find yourself biting your nails knowing what’s going to happen next, wishing he’d turn around sooner and even to the point where your shouting out “He’s not dead yet, cut his freaking head off!”. The ending twist to the movie is rather sinister and bloody, bloody by the bucket full!

Coming out in 2001, the film was obviously smothered by other box office hits that year which included; Musa, My Wife is a Gangster, My Sassy Girl, Kick the Moon and Friend. Obviously the film isn’t a masterpiece appealing to all movie goers, but I thought it was rather good. That’s my finale thought, enjoy!