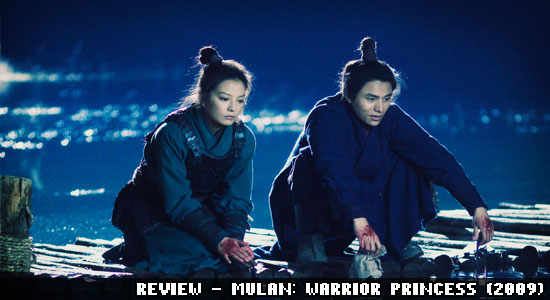 Set in period China, our story revolves around Hua Mulan (Vicki Zhao), a young tomboy, rather than looking for a husband, she has spent her life learning martial arts. When the emperor orders all able men to enlist in the army, Mulan discusses  takes the place of her ill father (Yu Rong-Guang).

Mulan is accompanied by her childhood friend Tiger (Jaycee Chan), the two befriend General Wentai (Chen Kun). Wentai discovers that Mulan is a woman and tries to convince her to leave, but after Mulan saves his life, the two become a unstoppable duo that quickly rise amongst the ranks of the army as they battle against the deadly Rouran hordes!Tokyo Raiders director Jingle Ma goes all serious and dramatic with the legend of the Mulan. Mulan is now the probably the tenth serious period war movie we’ve seen from HK/China (I think this is Vicki Zhao’s 4th serious war flick too) in the past five years and man they are really getting boring to be honest.

The performances from the cast was great, Vicki always gives a hundred and ten percent, Jaycee Chan was giving a surprisingly good role in the movie and he handled it really well. The terrific Hu Jun steals every scene he’s in as the movies long haired leading villain.

The movies action sequences are generic and don’t match the ranks of The Warlords as well as Red Cliff. The movie runs for just under two hours and only on a few occasions does the movie grab my full attention. Overall the movie is rather bland, but I do suggest anyone with the slightest interest please rent this movie!