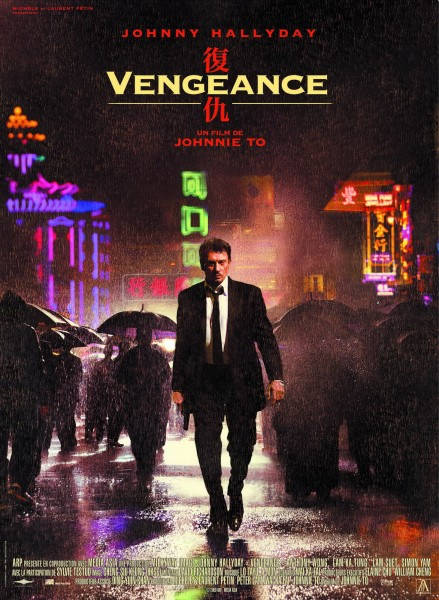 There’s no stopping Johnny Hallyday on his path of vengeance and neither does Stoo as shares his views on Johnnie To’s 2009 actioner as seen at the 2010 Terracotta Far East Film Festival.

French Chef – Francis Costello (Johnny Hallyday) travels to Macau upon hearing the news that his daughters family were ruthlessly murdered in their family home. His daughter barely survives the hit and Costello promises vengeance her family. He enlists the help of three professional hitmen (johnnie To regulars Anthony Wong, Gordon Lam and Lam Suet) to help him find the killers, although it turns out they don’t need to look far…

I looked this up so I best share this; Johnny Hallyday is the French equivalent of Elvis Presley. So the dude is very famous and looks like the devil. Now back to the review. The storyline of a father seeking revenge for his daughter is spiced up with the father joining forces with a hit team to seek his vengeance. The movie almost looses steam after the trio of hitmen reunite with Halliday’s character in the rain storm. This moment could easily turn off a lot of the audience but by the last act of the movie it works out really well and it won me over in the end.

A majority of the movie’s dialogue between Johnny Hallyday and the Chinese actors is spoken in English. The Chinese actors are all surprisingly good, with Gordon Lam sporting the most impressive English dialogue. With Johnnie To movies you need suspend disbelief and just go with the occasional over the top moment . One such moment is when the group is shooting a bicycle to pieces with pinpoint accuracy but they fail to shoot enemy hitmen! Lam Suet’s lovable character steals the movie and his shamelessness and perfect comic timing had audiences howling! Outside of our leading actors one notable character is Stanley Fung’s appearance as Anthony Wong’s “cousin”. His character’s clothes and scruffy appearance is identical to his look from Soi Cheang’s Accident and since both movies were made in the same year, I wouldn’t be surprised if he hopped from one set to the other.

I really looked forward to seeing Vengeance and I wasn’t disappointed. It’s not at the level of Mad Detective, Throwdown etc but I would rank this movie alongside the Election movies.