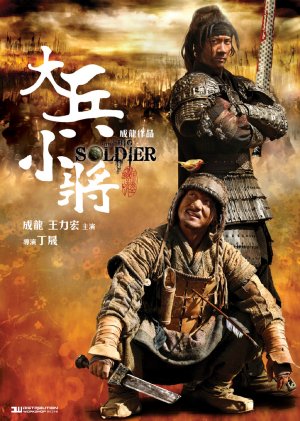 Before the days of a unified China, seven states were at war for their land. Liang solider (Jackie Chan) survives a battle by playing dead, an art in which he is truly the master. He proceeds to take captive the last remaining enemy general (Leehom Wang) from the Wei army. If the Liang solider can return to his home state with an enemy general as his prisoner he will receives riches, discharge from the army and most importantly to him – acres of land!

Jackie Chan’s 99th movie can easily be ranked one of his top movies from the past decade! The movie is surprisingly funny and I mean really funny. Not just Jackie Chan being charming funny, this movie is full of great laugh out loud moments! Jackie’s character is really quite humble, singing songs about his expected acres of land and lecturing Leehom Wangs character with stories from his father.

Leehom Wang has came along way from the days of The Avenging Fist and China Strike Force and his new sense of maturity shows that he can exchange his popstar looks and become the real deal. Wang’s character is constantly perused in the movie by a group of Wei led by their prince and his master. There is also a tribe of rebels who spend a majority of the film walking in at the wrong moments and amusing fight scenes. Speaking of fight scenes, the action is directed by Jackie Chan but Jackie isn’t the hero. He’s the deserter whose real talent comes from slipping stones! The fight scenes mostly consist of Leehom Wang dueling against the Wei conspirators and the tribes people as well as the leaders of the Tribes people battling against the Wei soldiers.

Overall the 99th movie of Jackie’s career is a special one and one I encourage everyone to see!