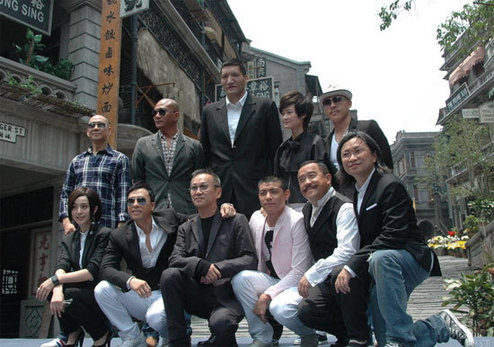 Yet another review sent in from the  2010 Terracotta Far East Film Festival by Stoo, this time of the Hiroshi Fuzakawa documentary Development Hell about the making of Teddy Chen’s Bodyguards and Assassins.

Development Hell is a 45 minute documentary detailing the horrible decade of disasters that surrounded the production of Dark October (which was released in 2009 as Bodyguards and Assassins) by Applause Pictures (a company founded by Teddy Chen the director and Peter Chan, director of The Warlords). I’ve chosen not read anything about the finished feature film but judging by the storyline of Dark October, it follows Chinas equivalent of “George Washington”, Dr. Sun Yat Sen, the man responsible for over throwing the last emperor.

The director of the documentary Hiroshi Fuzakawa captures the shocking events that plagued Teddy’s production, which started in 2000. They suffer everything from the SARS epidemic to a producer committing suicide. The documentary also unavoidably brings up Chen’s past, problematic projects such as Downtown Torpedoes where a crew member died on set after explosives were detonated. Among the interview subjects, we get to see with Teddy, Peter Chan, Peter’s father – Chan Tung Man (who originally planned to make the film in the early 70’s), Kate Yeung, Andre Morgan and Su Chao Pin. Many highlights include the exceptional stories told to use by the crew, the expected American remake of Purple Storm, the horrible tragedy that plagued Teddy even on the 2005 Andy Lau movie Wait ‘Til You’re Older!. It also features some great footage of the sets being built in China over the weeks sped up to mere minutes and I must admit the story board sketches that jump into a animation were pretty nifty.

The documentary is a very interesting piece, which you could use as the ultimate companion piece to Chen’s Bodyguards and Assassins. Seemingly the 2 disc dvd and blu ray sets contains the docmentary (reportedly subtitled as well!) as a supplement so be sure to pick those up! Info here.