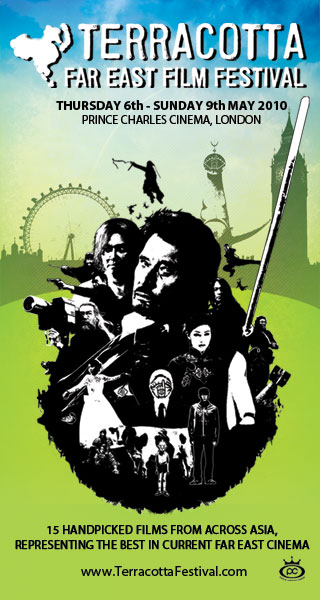 Terracotta Distribution are hosting thier second annual Terracotta Far East Film Festival in London, this May. They are present its choice films from the Far East! From Thursday 6th to Sunday 9th May 2010, they invite you to indulge in a fantastic lineup of 15 hand-picked films from Hong Kong, China, Japan, South Korea, and Thailand.

The festival opens with the UK Premier of Little Big Soldier starring Jackie Chan and closes with another exclusive premier; Bodyguards and Assassins starring Tony Leung Ka-Fai and Donnie Yen.

They are also having a Yves Montmayeur Far East documentary double-bill with In the Mood for Doyle, followed by Yakuza Eiga and then completed with a Q&A with the director.

There is a few films in that list I’m not familiar with, but I’m more than happy to look into, fine examples being; Antique – “Hot guy opens a cake shop to ogle girls all day long; gay pâtissier joins … to ogle the hot owner all day long!“

All details can be found over at Terracotta Festival.com