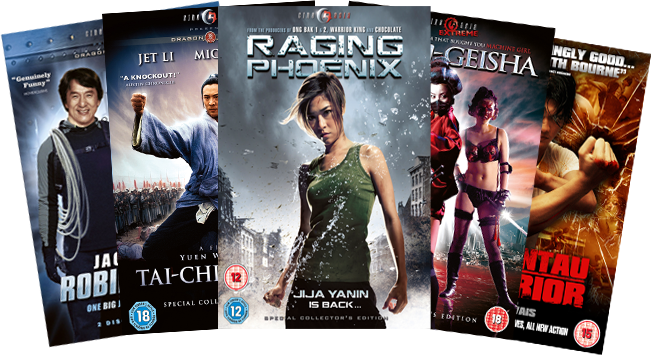 I think the UK Market for Asian Cinema is best, it has ever been.  So we’ve received plenty of Press Releases over the past couple of weeks about some of the great movies coming out. So here’s a run down of films we can expect to see in store over the next few months.

Monday 5th April brings us a treble bill of Japanese Video Gore! Cine Asia deliver a double bill of Hard Revenge Milly which also includes the sequel Hard Revenge Milly: Bloody Battle, double the Miki Mizuno people! Then we have MVMs Geisha Assassin aka Geisha V Ninja; Gentle as a Lady, Deadly as a Cobra!! The Milly double bill is £17.99 and GA will set you back £15.99

Monday 26th April gives us our next load of Jet Li classics released by Cine-Asia via Dragon Dynasty in Tai Chi Master. So we should be expecting the special features from US Dragon Dynasty release. Get ready to chuck away your copy of Twin Warriors! RRP on the DVD is 17.99. Third Window Films are also releasing Peppermint Candy on the 26th at £12.

Monday 24th May dates the release of Jackie Chan action comedy – Robin-B-Hood comes out on a double disc DVD and Blu Ray thanks to Cine-Asia via Dragon Dynasty. So yes, expect a identical line up of features from the US. Pricing is £17.99 (DVD) and £24.99 (Blu-ray)!

Monday 7th June Cine-Asia Extreme are releasing more Japanese Video Gore! Yes Robo-Geisha comes  out on DVD and Blu Ray! And I want nothing to do with it! No details on Special Features yet, but the pricing is £15.99 (DVD) and £24.99 (Blu-ray). Also we will get the chance to see what looks like our first Tony Jaa clone movie! Merantau Warrior comes out on DVD from E1 Entertainment at the humble price of £12.99. Optimum Home Entertainment also aim to release a two disc Special edition of Studio Ghibli’s Ponyo on two disc DVD @ £11.99 via Amazon.

As you can expect, Reviews coming soon!