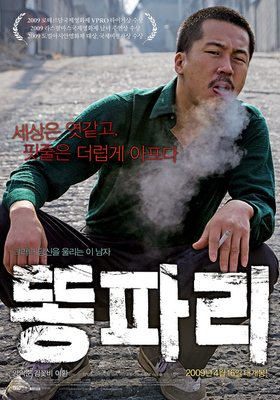 Yang Ik-june stars as our Anti-Hero – Sang-hoon. A man deeply troubled by his past which leads him to becoming a very difficult person, even to the extent where he shuts out his step sister and nephew. Therapeutically Sang-hoon works in his spare time as debt collector for his friend, when finished one day he meets/assaults a strong headed school girl lives with a ungrateful brother and a mentally paranoid father.

The mismatched couple strike up a unique friendship, helping each other get through life’s challenges.

My initial impression of this movie going into it wasn’t positive, I had watched the teaser trailer where we saw Yang Ik-June smacking Kim Kkobbi in the mouth. I thought, man this is really going to be one of those films that I don’t “get”, but thankfully we are shown what makes Sang-hoon go from – man to monster.

The story is good, slowly annoying at first, but after the first occasion where both characters meet and we get to see more of their home-life the story really becomes interesting. One of the film amusing highlights comes from the amount of swearing each character slurs out, we hear ever; c***, w*****, mother f*****, b******, from our leading cast!

As you can expect from Korea Cinema the movie does clock in at over two hours and that is only a minor complaint. The movies ending really struck me as being cliched and being honest this is my only complaint. Yang Ik-June working as the writer, producer, director and leading star shows true potential and will leave Breathless!