Terracotta Distribution at set to release Yang Ik-June’s “Breathless” in theaters across the United Kingdom in January 2010. The blurb that came with the press kit; 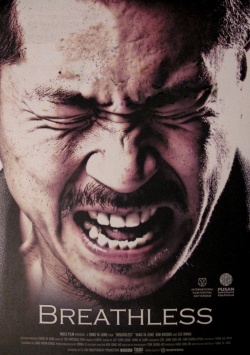 The winner of numerous international film awards in 2009, including the Tiger Award at the Rotterdam International Film Festival, the Jury Prize for Best Film and Best Male Performance at Montreal’s Fant-Asia Film Festival and the Best Film award and Critics’ Prize at the Deauville Asian Film Festival, the debut feature from South Korean writer-director and star Yang Ik-june, BREATHLESS is a brutal, uncompromising and profanity-filled look at the cause and effect of domestic violence. Out in cinemas nationwide from 29th January 2010

Giving a stunning performance in the film’s lead role, Yang Ik-june stars as Sang-hoon, a deeply troubled man prone to violent outbursts, who freelances as a hired thug at his friend’s debt collecting firm. His private life revolves around his extremely strained relationship with his ex-convict father, who was directly responsible for the tragic breakdown of their family, and a slightly more subdued, but still difficult, connection with his stepsister and her young son.

Seemingly possessed by the pent-up rage caused by the domestic events from his past, Sang-hoon finds an opportunity for salvation when he encounters a similarly emotionally damaged schoolgirl ((Kot-bi Kim), who is as foul-mouthed, headstrong and fearless as he is. The two begin an offbeat and touching friendship, not realising that their lives are already connected in ways that will have a profound effect on both their fates.

For those interested in this, here is the link to the teaser trailer; Click Here To me, I really didn’t think much of that teaser, but Terracotta have released good dramas in the past, for example the excellent; God Man Dog.