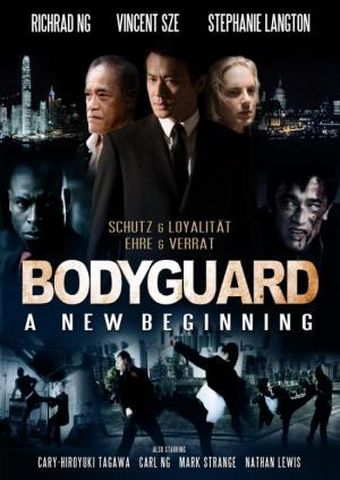 Plot: When aging crime lord Wong (Richard Ng) turns down the offer of joining forces with loud American gangster Kai (Cary Hiroyuki Tagawa), his power hungry son Yuen (Carl Ng) doubts his father’s judgment of a overlooked golden opportunity. Yuen’s finally looses his cool after his father chooses his bodyguard over his only son to par take in a secret mission. Wongs bodyguard – Leung (Vincent Sze) is sent to the United Kingdom to look after a young English woman in London. Rebelling against his father Yuen gets into deep trouble and ends up running to Kai for help. Let the betrayal begin.

Review: The plot summary there does give you the impression that the story is fixed on our characters Wong and Yuen  but a majority of the film is based on our true star – Vincent Sze aka The Bodyguard. In true bodyguard fashion Vincent plays the cold silent type who guards the lady from a far and soon throws himself at her after saving her from a group of thugs.

Vincent’s character shows a lot of influence from various Jet Li movies, funnily enough Bodyguard from Beijing isn’t one of them. I was constantly reminded of Jet Li’s characters in films such as Kiss of the Dragon and Hitman.

The action sequences are choreographed by former Jackie Chan Stunt Team member; Anthony Caprio. The movie does have great action sequences, the fights in the warehouse are well executed and the fight on the rooftop with Vincent going against Mark Strange and Nathan Lewis is reminiscent of Jackie Chans rooftop fight in Who Am I?

The veterans will be a warm welcome to any viewer, it’s always great to see Richard Ng, Cary Hiroyuki Tagawa from Mortal Kombat and of course the late great Shing Fui-On.