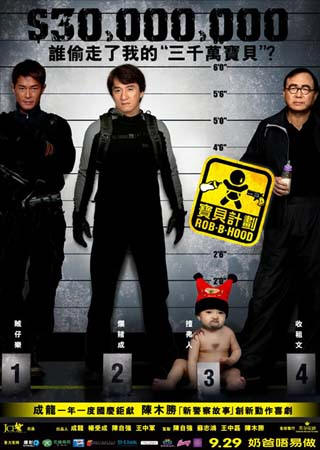 Plot (HKFlix): Slipper (Jackie Chan), Landlord (Michael Hui) and Octopus (Louis Koo) is a ‘dream team’ of “Thieving Musketeers”. They are like a bullet out of a gun whenever an opportunity for a heist comes. However, rape and pillage is out of the question, as their principle is never to intentionally hurt anyone.

Man Yee, sole heiress to the distinguished Ding Family’s fortunes, has given birth to a boy – Matthew. However, he is snatched away by Man Yee’s ex-boyfriend Max (Terence Yin), who in a state of jealous delusion, thinks Matthew is his own flesh-and-blood. An unfortunate accident leads to Max’s untimely death. Max’s father, a mafia boss is out to take revenge, but more importantly, to regain custody of his ‘grandson’.

A reward of 30 million for the kidnapping of a tiny tod sounds like an offer that the thieving trio cannot refuse. However, one thing snowballs into another, landing everyone into a moral dilemma and a dangerous quandary. And adorable Matthew has made his way into everyone’s heart, so they have to choose between the ransom and their conscience.

Review: When this project was first announced the movie was entitled “Project BB” and the trio of thieves were going to be Jackie Chan, Sammo Hung & Yuen Biao. This sent the internet community into a fit in the hope that there could be one last movie starring “The Three Brothers”, plans soon changed with Eric Tsang replacing Sammo. Plans changed again when the trio of thieves were changed to Jackie Chan, Michael Hui & Louis Koo and the film was renamed “Rob-B-Hood”. With the new cast and new title, it obviously killed some of the momentum that the film was gaining.

The film is great, I laughed, I nearly cried and I shouted “Kick his ass!” at the TV on two occasions. The cast was flawless, the guest appearances we’re great and the cameo appearances from Daniel Wu and a stammering Nicholas Tse were just priceless.

Now many Michael Hui fans will be let down by this flick since Hui is only really in 1/3 of the entire movie. They’ve chosen the right character, because Hui’s character ‘Landlord’ was a boring guy really. I have nothing against Michael Hui, oh, no, no I respect him immensely. Comparing his character with the unlucky gambler and the womanizing playboy, he’s a bit of a dull one.

Yuen Biao co-stars in the flick as a police inspector ‘Steven Mok’, his character was friends with Thongs when they were in School together, but now on opposite sides of the law he tends to over look some of Thongs flaws. There is a great scene where Steven goes to Thongs apartment which is filled with debt collectors, triad lackeys, Octopus’s pregnant wife, Thong’s crush Melody and the baby. Confused by the amount of house guests Thongs tries to play some of them off as his cousins. Soon as Stevens back is turned the Triads and Debt Collectors lunge for Thongs!

Part of what makes this such a great film for the hard core HK cinema fans is seeing Yuen Biao and Jackie Chan together on screen. That said, his talents felt wasted, and his appearance comes off as a little forced. The role he played was just not important enough. The biggest disappointment is having one of the best climactic showdowns to come out of a HK film in a long time, and having Yuen Biao show up when its all over. However, we do get a little taste in the middle of the film with some limited action from Biao. But when its all said and done, it almost felt like a tease.

Probably only the only joy kills in the movie is the CGI. Now I know CGI was only used in scenes where it wasn’t humanly possible for a child, but it still looks pretty naff. Some CG shots of baby Mathew strangely look two dimensional. I even think there was a blue a screen of Jackie running with the basket, but why wouldn’t he use a blue screen, if he actually went and done that stunt and it goes wrong this would have been Jackie’s last movie! Trust me the CGI is the only thing that spoils the movie, the rest of it can possible be the best action comedy of 2006.

The cast is excellent. However, as good at the film is, if it had stayed a three bothers film, it would have been so much better. Perhaps having Yuen Biao, Sammo Hung, and Jackie as the three thieves would have been too obvious. So in this reviewers humble opinion, and with all due respect to Louis Koo, it would have been great to see Yuen Biao in Koo’s place, and Sammo in Yuen’s place as the cop. The idea of pairing Jackie and Yuen, and then having Sammo as the third wheel works so well(See Wheels on Meals, or Dragons Forever). The film is wonderful, but having our beloved trio together again would have made it a true classic.

Credit also goes to Jeff Wildman for helping with this review.