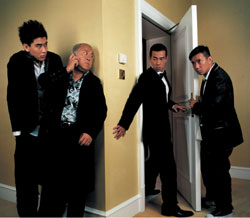 Men Suddenly In Black is one of the most original films I’ve seen in ages. With a complex, but amusing story of four men attempting to fool around as much as they could before their wife’s return from a 14 hour Buddhism trip to Thailand. After failed attempts in the past, Tin (Eric Tsang) ensures his three companions that they will succeed this time.

They have went to great lengths to ensure victory. Equipped with various types of Viagra, 9 flavored condoms (everyman has his limits), new SIM cards, Cash (instead of using credit cards, where traces can be found) and non attention seeking vehicle, aka Taxi!

Medical Doctor Cheung (Jordan Chan) is Tins second in command, being old buddies when it comes to the messing around, although Cheung wants to know Tin more, other than meeting up to find women.

Chao (Chapman To) the story teller of the group, he cant help but mention a story he’s heard. Also known for his singing in karaoke bars. Funnily enough that’s where he met his first love as well…

Paul (Spirit Blue), Tins nephew. He’s a university student from Beijing who is wanting to follow in his uncles footsteps, but he doesn’t really get hang of it, still having his virginity at the tend age of 22.

This film is a breath of fresh air to dark comedy genre. With enjoyable scenes such as; the paparazzi attack, Tin meeting his first love ‘Jo Jo’, Chao accidentally paying by credit card and so on. The film even has its fair share of familiar faces; Sammo Hung, Chin Kar-Lok and Alan Tam. They even make references to other stars in Hong Kong such as Stephen Chow, May Zhao and Bruce Lee!

Final thoughts, this film is just magical, you can diffidently watch this film more than once and still laugh at some scenes. So if you’re a fan of Dark Comedies and you want to see Eric Tsang in a giant yellow jumper, Men Suddenly In Black is the film for you!