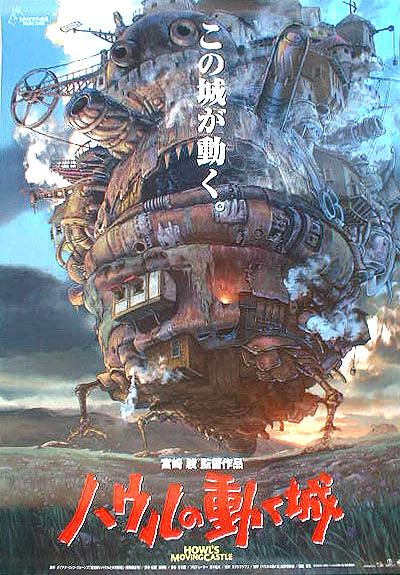 Plot: When a young woman, Sophie is turned into a elderly woman by ‘The Witch of the Waste’, she decides to travel to the Wasteland to find the Witch. One her journey she befriends a rather odd Scarecrow nicknamed ‘Turnip head’, she convinces the scarecrow to find her a place to stay, expecting a small bed and breakfast she is surprised to be see a gigantic moving castle heading towards her. She manages to climb into the castle from the back entrance, still being followed by Turnip head.

When entering the castle she meets a fire demon Calcifur, his job is to move the castle for the illustrious wizard Howl. Sophie had already met Howl before; he had saved her from a couple of rowdy soldiers.

Howl has Calcifur under a contract, Calcifur and Sophie make a deal if Sophie can break his contract between him and Howl and he will help Sophie break the curse from the Witch of the Waste.

Review: Hayao Miyazaki does it again! With his world wide success with Spirited Away, fans would be eager to see if Miyazaki’s next project would match the standards he set in 2002. My honest opinion, he did!

Miyazaki creates this fantasy world mixed with lovable characters, beautiful animations and amazing music which makes you forgot about the troubles of the world for two hours.

Having the watched the movie dubbed I found it delightful that American actor Billy Crystal dubbed the voice of Calcifur which really makes his character lovable and charming. Strangely enough Batman actor Christian Bale also provided the voice of Howl, which gives his character a masculine edge to it, since his looks and physique are quite feminine.

I cannot recommend this movie enough to everyone; it really is a brilliant film which should be enjoyed by all. If not…I hate you! (Just kidding)